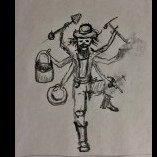 Tiny Gold With The Equinox 600