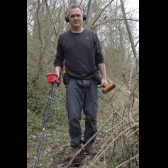 Detecting With The Vanquish 340

By palzynski, June 29 in Metal Detecting For Coins & Relics