Dead Or Dying TDI SL Back To Life As A Spp 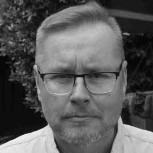