Detecting In The Cargo Muchacho Mountains 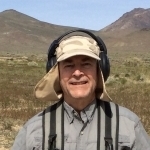