Steve: Can I Pick You Brain? 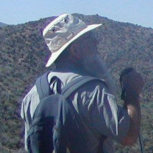