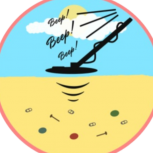 By Joe D.,
Monday at 04:27 AM in Detector Prospector Forum