Got To Test A Handheld Xrf! 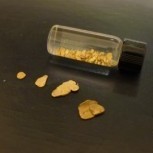