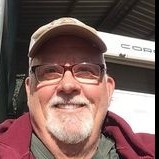 By vanursepaul
May 26 in Detector Prospector Forum