Beautiful Barber That Has Been Underfoot And Coil For 50 Years 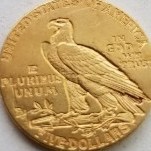 By Zincoln
October 27, 2022 in Metal Detecting For Coins & Relics