SDC Over Load Signals On Gold? 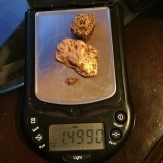