I am a big fan of the Fisher F75 from a different perspective than most. I am a prospector and have done very well finding gold nuggets with the F75. The very powerful all metal mode combined with the simultaneous on screen target id numbers have allowed me to quickly and efficiently hunt trashy tailing piles in search of large gold nuggets. The light weight and superb balance make the F75 a pleasure to use for long hours in rough terrain. It also was my detector of choice for my one and only trip to the UK that I have done so far, and it served me well there.

I spent a month in 2013 metal detecting on Jack Wade Creek near Chicken, Alaska. I kept my great results there quiet pending a return trip there in 2014. That trip has now been made but that is another story already told in detail on my forum at Steve's 2014 Alaska Gold Adventure. Now I can finally reveal the details of the 2013 expedition.

As I explained in the previous entry Making Lemonade Out of Lemons I had decided to take four metal detectors to Alaska with me, with the Minelab GPX 5000 as my main unit, supplemented by the Fisher Gold Bug 2 for tiny stuff and Gold Bug Pro for trashy areas. As I also explain there, the Fisher F75 was redundant, but in the end I could not bear to leave it behind.

I started out early one morning with my big gun pulse induction metal detector, but got onto a tailing pile that had ferrous trash scattered down one side, and I was just not in the mood for it that morning. I went back to my truck and got out my trusty F75. I run the F75 in all metal because it has instant target response; there are no worries about recovery times in all metal. The coil picks up every variation not only in targets but in the ground allowing me to monitor what is going on at all times. Knowing what the ground is doing is important in keeping the ground balance properly adjusted for maximum results. 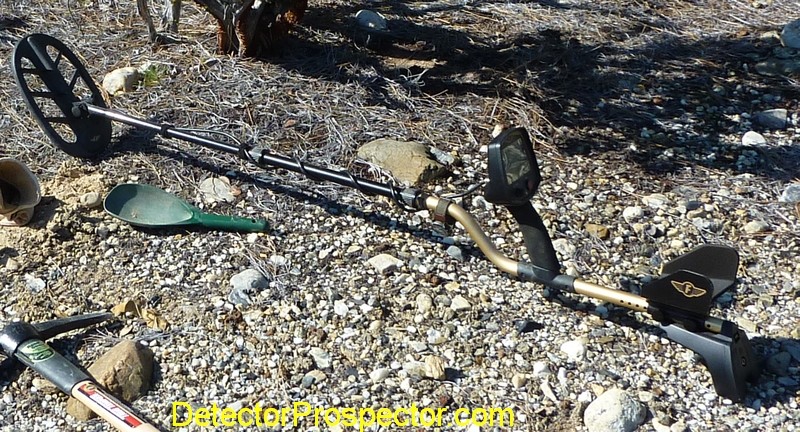 In all metal I dig them until a target number shows up. Deep targets or small targets in mineralized ground will often read ferrous, so I watch the numbers and if they even once jump to non-ferrous, I dig. Only targets that give a 100% strong ferrous reading over multiple sweeps can be safely passed. Though I will throw in my caveat that no discrimination system is 100% accurate and there is always a risk of passing a good target. When in doubt, dig it out!

I do often employ pulse induction detectors and do very often just dig everything. I advocate that when time and conditions allow. The reality is this is not always practical for many reasons. Maybe it is just limited time and overwhelming amounts of junk. Better to increase the odds by using discrimination than bogging down digging 100 nails in a small area. In my case it often boils down to fatigue or flat out not being in the mood to dig junk.

So it was on this particular morning, and therefore my F75 came out and I got to work sorting through the trash working my way up the side of the tailing pile. I crested the top and got a strong reading and looked down. There was a shallow dig hole with leaves in it, obviously from some hunter there in prior years. I figured the guy had recovered a trash item and kicked it back in the hole so I cussed him quietly under my breath. I hate it when people do that

Then the target numbers caught my eye. They were all over the place. A crumpled piece of flat steel might give numbers like that though. Still, I was curious and figured I would retrieve the trash this person left in the field. I gave the old dig hole a big scoop, and out pops a big gold nugget!!

I seem to have a talent for finding ugly gold nuggets, and this one was perhaps the ugliest I have ever found. It looked more like a rock burnt in a fire than a gold nugget when I dug it up, though the glint of gold is unmistakable. This gold however was very pale and in fact later analysis revealed it to be roughly half gold and half silver and other metals. 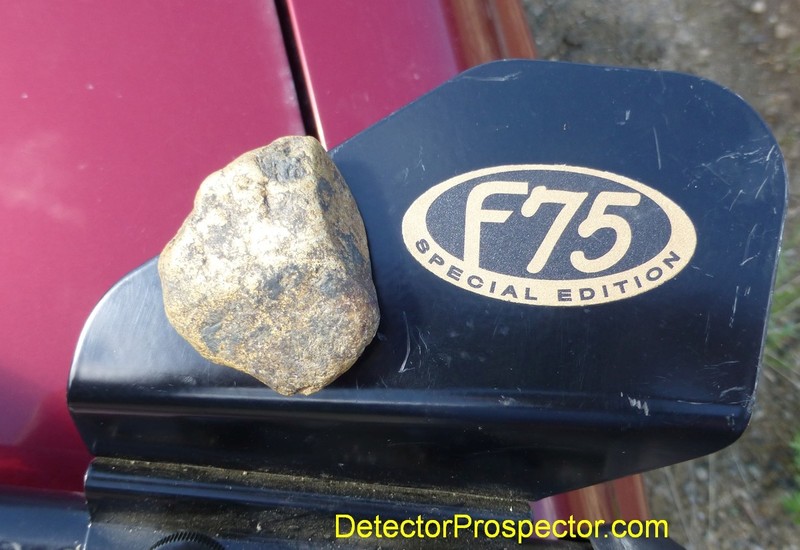 Top and bottom views of the Jack Wade specimen

It is a little known fact that gold alloys tend to have very poor conductivity ratings. Gold is very conductive, and silver is a superb conductor. You would think adding silver to gold would improve the conductivity, but in fact just the opposite happens, and the conductivity lowers dramatically. Gold/silver alloys are closer to lead in conductivity than that of the pure component metals, explaining why bullets read identically to most gold nuggets. This nugget has a very pale gold, much paler than most gold on Wade Creek. I found another pale gold nugget like it later and was told locally that it is suspected that the source of this gold is somewhere up Gilliland Creek, an upper tributary of Jack Wade Creek.

I did later sell the specimen, and the buyer performed an X-Ray Fluorescence (XRF) assay of the specimen revealing that it is 53% gold and 44% silver, a little iron, and a smattering of platinum group metals. The platinum group metals are extremely interesting, as it would indicate the possibility that the gold is related to an ultramafic bedrock source? Some of the rock enclosed in the specimen is decidedly darker than normal, another clue that the source might be unusual. Technically something with this much silver in it would be called electrum rather than gold. Electrum is a high silver content gold alloy. 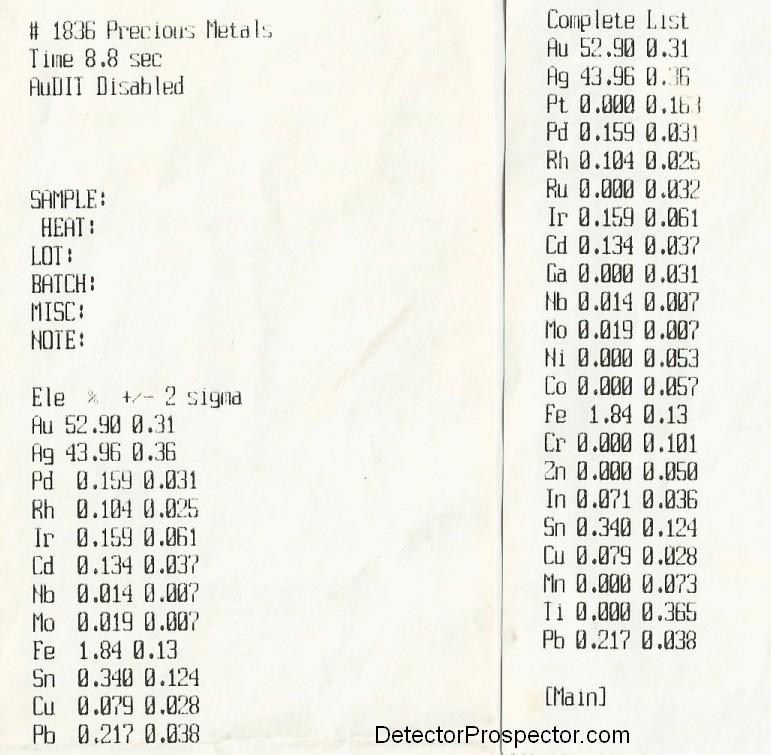 This ugly nugget is a detectorists worst nightmare, because the 50-50 alloy mix and the rock content give it a much lower conductivity reading than would be the norm. I surmise what happened is this earlier operator got a poor signal and gave a quick scoop to get the coil closer to the target. The signal did not improve, as would be expected with most gold nuggets, so the operator decided it was trash and moved on. The rest of the hill being covered with junk no doubt contributed to this decision.

It was my insistence on investigating everything except 100% ferrous readings that made the difference. The readings on this target were not solid as one would expect from a pretty strong signal but all over the place. Most people would say that indicates a trash target but I have seen many gold nuggets do the same thing in mineralized ground. The result is I dug a shallow 2.37 ounce gold nugget that somebody else walked away from. Sadly for them one more scoop would have revealed the nugget for what it was. Hopefully this is a reminder to the reader that far too often detectorists look for excuses not to dig. How many good finds get left behind because we do not want to take that extra minute or two to dig a target?

This nugget is far from a premium find, but I have already sold it for over twice the cost of a new Fisher F75. That detector was a real money maker for me as that was far from the only gold I ever found with it. Good thing I decided not to leave home without it!