It's now the middle of winter as I write these words. It has been one of the busiest years of my life, and so I've fallen off on keeping up with my Journal entries. Time to do some catch-up.

My father Bud Herschbach and partner John Pulling and I took the time to make a few final visits to Moore Creek in September and October before the snow set in. We spent quite a bit of our time on claims work, staking additional ground and readying the property for winter. We now have a total of ten 160 acre claims and three forty acre claims covering what we believe to be the ground with the best potential. Although there is gold on all these claims, only more testing will determine which claims will be worth further development and possible mining.

The weather ranged from cold, dreary, rainy fall days to beautiful, clear blue days. Freezing temperatures at night have a bonus in that the mosquito population drops of to levels that are actually bearable in the late fall. Some of the best times to be in Interior Alaska are early spring and late fall because of this. I've always enjoyed fall, with all the colors, and that cool air in the morning seems to add a little extra zest to the days. It's just too bad that falls are usually so short in Alaska, although this year it did extend out later than normal. We really did not get winter weather until November.

John was particularly anxious to do some sampling with his highbanker that we flew in to use for test work. We set it up at the edge of the large tailing pond just above camp where we have previously found gold metal detecting and panning. The area has been mining, but the miners did not excavate far enough into the decomposed bedrock, and so digging the rotten bedrock up with shovels was showing some nice gold with pans. We decided running a little more volume through a highbanker would be instructive. There is a fairly large unmined bench deposit at this location that has good potential. 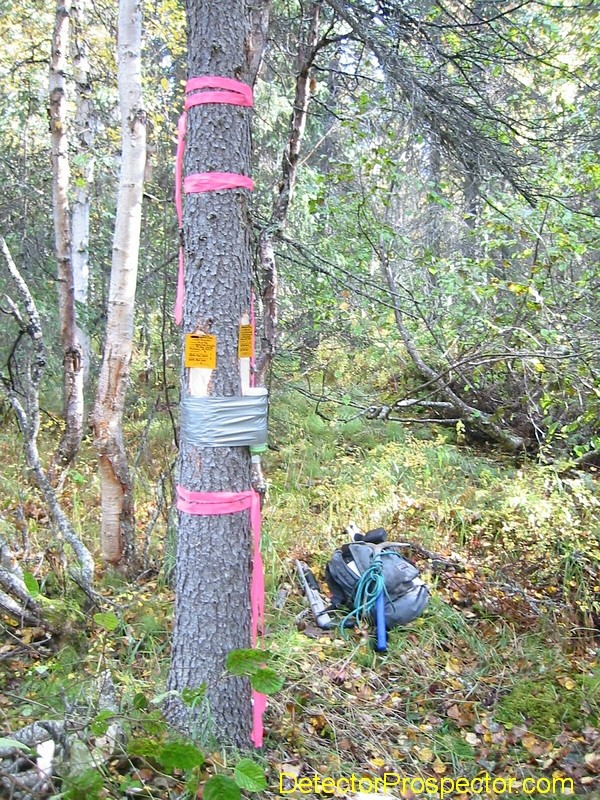 We ran a couple yards of material through the highbanker, with good results. Since the cream of the crop has already been skimmed off here, however, more work remains to be done to determine the potential of the site. A larger volume of virgin material from the bench needs to be tested, but that will have to wait for 2004 after we get all our permits in order. For now, it was certainly encouraging to see some gold. More sampling in the immediate area of the cabin at camp returned similar results where the old miners did not excavate enough bedrock to get all the gold.

We also made time to do some metal detecting, of course. My father used his Tesoro Lobo SuperTRAQ, plus tried my Minelab GP 3000 and Garrett Infinium. John experimented with the Troy Shadow X5, Fisher Impulse, and Fisher Gold Bug 2. This trip I favored my Garrett Infinium. I did use my Minelab GP 3000 also but I wanted to give the Infinium a good try at Moore Creek. Although I believe the GP 3000 with its large coils has superior depth on large nuggets, I like the Garrett for working in the rain (it's totally waterproof) and in thick brush. It does not get the depth of the Minelab but is better than the VLFs so it falls in the middle performance wise. In any case, while I knew I would do well using the Minelab, I decided to just stick with the Infinium the majority of the time just to see what it could do.

Testing the bench deposits with a highbanker

As you can see I usually hip mount the unit so there is less weight on my arm. About the only time I would use the unit in one piece would be if I were doing some sort of work where I was constantly picking the detector up and setting it back down again. Sometimes I'll work a likely location by spending quite a bit of time removing rubble or scraping off surface material with a rake, then taking a few minutes to scan the area with the detector. Then back to digging or scraping. In situations like this it is nice to have a unit you can pick up, use a few minutes, and set back down again, without having to strap on a control box or battery pack. But for normal use the hip mount is the way to go, as the waterproof control box with it's included batteries is a bit heavy for long hours of use.

Garrett has released a coil cover for the 14" coil which came in handy, as the open coil design would normally like to hang up on low lying brush. I also used the new 10" x 5" DD elliptical coil which is very light in weight, and more pleasant to use than the epoxy filled stock coil. The 14" coil balances well with the unit assembled in one piece, but it is "nose heavy" when the control box is hip mounted as you no longer have the control box to balance out the weight of the coil. I really wish Garrett or a third party would produce a large coil for the Infinium that is not epoxy filled. A coil like the Coiltek UFO 24" x 12" open-spoke design I use with my GP 3000 would be ideal.

The smaller coil worked great around the base of bushes and around rocks. In general I favored the larger coil though as it covers more ground and I'm certain it hits larger nuggets a bit deeper than the smaller coil. The smaller coil is a little "hotter" than the stock coil but this means it also tends to give a weak signal on some hot rocks that the larger coil ignores. Still, it is a great little coil, and is the one to use for tight areas and for slightly smaller nuggets than the 14" coil may be good for.

The Infinium ran quiet in the mixed hot rocks at Moore Creek, with only a couple that gave a signal with the 14" coil. Hi-lo tones were either gold or slivers of steel. Larger pieces of steel and iron, including nails, gave a lo-hi tone. Theoretically a large enough nugget might give a lo-hi tone but all mine have been steel so far or aluminum cans. I pretty much dug everything but as I do so I'm finding my faith in the dual tone id is growing. If trash was thick I'd ignore lo-hi tones and be pretty confident of not missing gold. But always remember, that no discrimination system is 100% accurate, and so if the amount of trash is acceptable, digging it all is the only sure way not to leave a nugget behind.

The results with the Infinium were seven nuggets totaling 4.11 ounces of gold. The largest nugget is 1.5 oz and the second largest 1 oz. I did find one nugget with the GP 3000 that weighed 1.26 oz. By the way, although I'm calling these nuggets, they are really more properly termed gold quartz specimens (in my opinion). These have been cleaned to remove the rust staining they pick up from sitting in the soil for ????? years and so reflect the actual color of the quartz better than my previous pictures. The enclosing rock is grayish quartz and sometimes bits of the quartz monzonite that the quartz veins are eroding out of. Quartz monzonite is a "salt & pepper" looking type of igneous rock, much like granite in appearance. I did better than I expected, as looking for gold was secondary to claim staking and winterizing the camp. But my hot streak from my previous visit continued, and I ended up with some nice nuggets. One nice thing about larger nuggets is that I actually only found eight nuggets total... but they added up to 5.37 ounces. 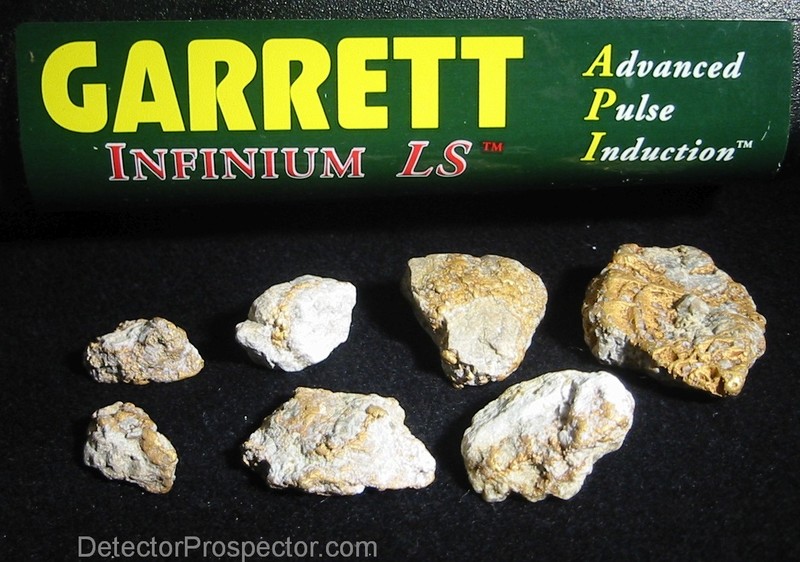 Results with the other detectors helped confirm this is an area for ground balancing pulse induction (PI) detectors like the Minelab SD/GP detectors or the Infinium. The Troy X5 was not happy at all with the hot rocks. I was most interested in Johns use of the Fisher Impulse. The Impulse is similar to the many PI detectors on the market for diving use. In theory they can be used for prospecting, and many people ask about them for just that reason. But the lack of ground balance means they actually do not do well for prospecting mineralized areas, and the Impulse hit the rocks at Moore Creek nearly as much as the VLF detectors. The Lobo and Gold Bug 2 were useable primarily due to their iron discrimination modes. In all-metal they were extremely noisy, but set with iron rejection cranked in they worked fairly well, although with lots of pops and snaps of hot rocks breaking through the discrimination. Luckily the noises are discernable from the clean sound of a gold nugget. The biggest problem is that any nuggets near or under hot rocks are just plain going to get missed with VLF detectors at Moore Creek.

My father scored a couple nuggets totaling 0.65 oz with his Tesoro Lobo and John got about 2.5 oz with his Fisher Gold Bug 2. Both are now looking to get the Infinium for next year. The Minelab is a fine machine, but they are more comfortable with the price/performance ratio of the Infinium. Lots of bang for under $1000 and simple to operate. So it looks like there will be lots of Infinium gold to report from Moore Creek next summer. I'm sure I'll be using my GP 3000 as my primary unit, with the Infinium filling in the niches. It's the machine for sure for rainy days, and I think I'll even jump in some tailing ponds with mask and snorkel and nugget hunt underwater. For me the GP 3000 and Infinium are a great match for Moore Creek, each excelling where the other is weak.

We finally had to give up on detecting in September and get all our final claim staking done. It is a lot of work but compared to the old days it is easy due to the ability to use GPS while staking state mining claims. Our final days in early October were really nice. I like those crisp fall mornings, color on all the leaves, and the bugs basically all gone. We staked up new claims plus re-filed on the original prospecting sites that we purchased to convert them to mining claims. These prospecting sites constitute the core property at Moore Creek and since prospecting sites are only valid for a short time it was time to get them converted to claim status. Then it finally came time to wrap up the camp for winter and go home one last time.

As I noted at the start of this entry, it's now the middle of winter. All I can do now is work on permits and wait for spring to come to Alaska... and dream about the gold yet to be found!