This is a follow up of my previous post about finding a couple Mercury dimes in a row with the Equinox. There is important information there about ground conditions and so if you have not read it already now would be a good time.

I was stuck in a race against time because I got a final hardware/pre-production version of Equinox just before freeze-up hit here in Reno. Prior to that I spent very little time having fun detecting - it was all development type work. Once I got the "close to final version" of the hardware I suddenly realized if I wanted to go detecting with Equinox I had better get with the program before the ground froze. With time running out what you are looking at is the results of less than a dozen outings to local parks, maybe 3-4 hours at a time average. The ground actually froze a few weeks ago and so I saved this post just to have something to show during a period of time that I figured I would be out of action.

I am not trying to prove anything per se here, but what I saw convinced me Equinox has that little bit something extra I have been looking for in a coin detector. It is not purely a depth thing but a combination of depth and speed that seems to pull silver out of places where I had not been having much luck for three years with quite a few VLF detectors. Anyway, I figure everyone is starved for somebody to post something of a positive nature and this is my New Year's gift to you all. Click for larger version. 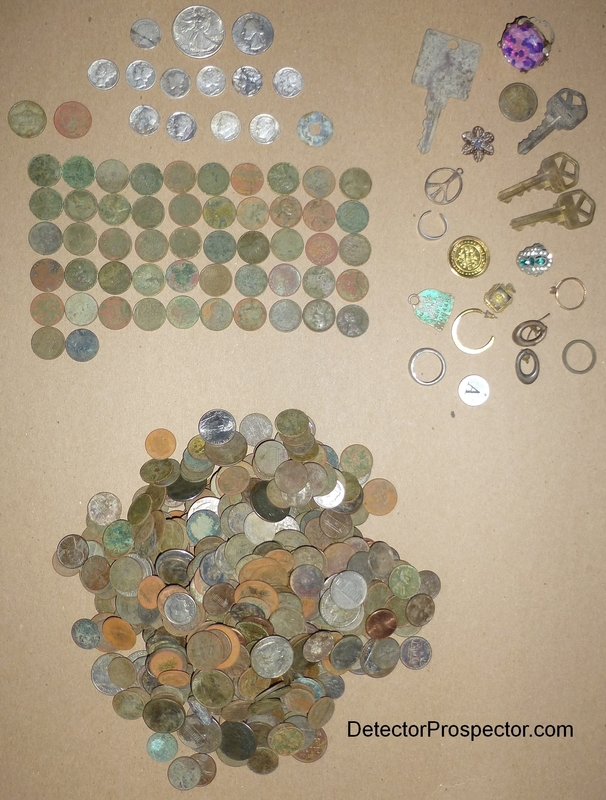 I wish now I had kept the trash to show because I was cherry picking targets, and that being the case there was very little trash dug for this pile of coins. Way more coins than trash. I mostly just targeted the copper penny/silver range to maximize my time but did go after some nickel signals. As far as I know the target id numbers are locked in now, so I will mention a couple. Nickels hit hard at 16 and for copper/silver I was digging anything that gave me a 28 or higher. Corroded copper, Indian Head pennies, and zinc pennies will generally hit lower than that in the 24 - 27 range but like I say I was cherry picking. (Jan 2018 edit: the numbers have changed - nickels now at 13 and copper pennies/dimes at 25 and higher.)

So we have a large pile of recent vintage coins. Junk jewelry and keys in upper right.

There are 52 "Wheatback" pennies or wheaties as people call them. We all love wheaties, not because they are worth much these days since so many are in poor condition, but because if you are finding wheatback pennies then silver can't be far away. The oldest coins in this batch are in there though - 1911, 1913, and 1918 pennies. My favorite was a 1930 penny found at less than 2 inches next to a picnic table where each swing revealed a couple dozen targets. Literally a carpet of trash. There is stuff hiding in trash and not all that deep at times. A nice little squeak revealed this particular penny in the midst of the dense trash.

The silver though is what grabbed my attention. One of the first places I went was smack in the middle of a picnic table type location that by all rights should have been hunted clean of silver ages ago, and I kind of thought it was using the machines I tried there before. So when a 1936 Quarter popped out almost immediately I was surprised. Every outing I was digging quite a few wheatback pennies, and on nearly every outing a silver coin or two showed up. The 1916 S Barber dime also showed up early, only the second one I have ever dug, so I was pretty thrilled with that. It also was a learning experience because I also found a 1916 S Mercury dime. Until now I had no idea both series were minted in 1916. 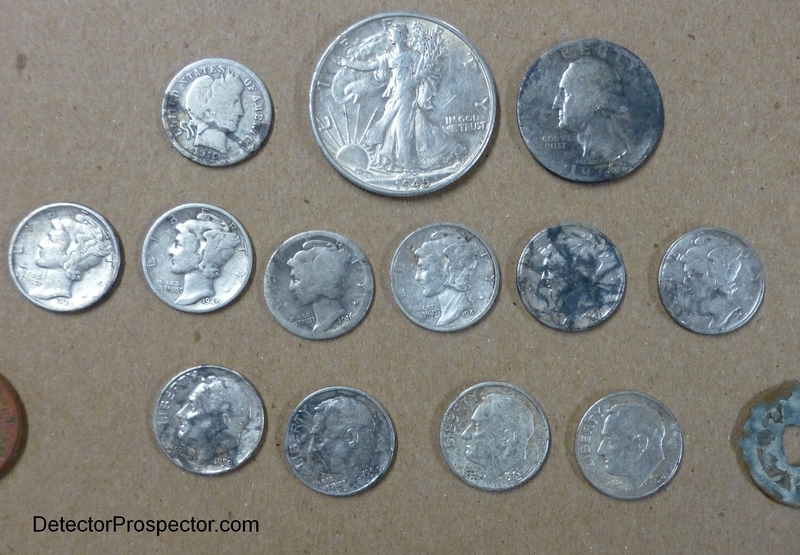 The one that really blew me away was the 1945 S Walking Liberty Half Dollar in excellent condition. Again, right in the middle of a picnic area. I got a nice high tone and not all that deep up comes a round lump of clay with a white ring showing around the edge. I thought it was a bottle cap, and so gave the lump a twist and the half dollar popped out. The coin is really in great shape and much to my annoyance I seem to have put a small scrape in the middle of the coin when I twisted the lump of dirt off. Just a great coin though with halves being a rare find these days.

What puzzled me is why it was there less than 8" deep in a location that has no doubt seen hundreds of detectors if not more over the last few decades. I hit that immediate spot hard of course, and it developed that there must have been an old pipe there that had corroded away to nothing. There was a linear zone that wanted to produce quite a few high tone ferrous wrap signals, which tend to hit around 39 very consistently, well above the 28 - 36 range where copper and silver normally hits. I suspect others have detected that half dollar before but wrote it off as a false signal or maybe it was just ferrous masking. Whatever it was, Equinox found it easily. That is what is weird about this machine. I will be shocked if people do not end up making similar reports where you are just shaking your head and thinking "but that coin should not have been there"!

Obviously I found a few more Mercury dimes and some Roosevelt silvers. There is a 1942 P "War Nickel" from when they made nickels with a high silver content since nickel was a strategic metal during WW2. And a 1920 Buffalo nickel. They both hit hard at 16, which is surprising given the difference in composition. Some nickels hit at 15 or 17 but the vast majority are real tight at 16. Equinox is going to be a cherry pickers dream. (Jan 2018 edit: the numbers have changed - nickels now at 13 and copper pennies/dimes at 25 and higher.) 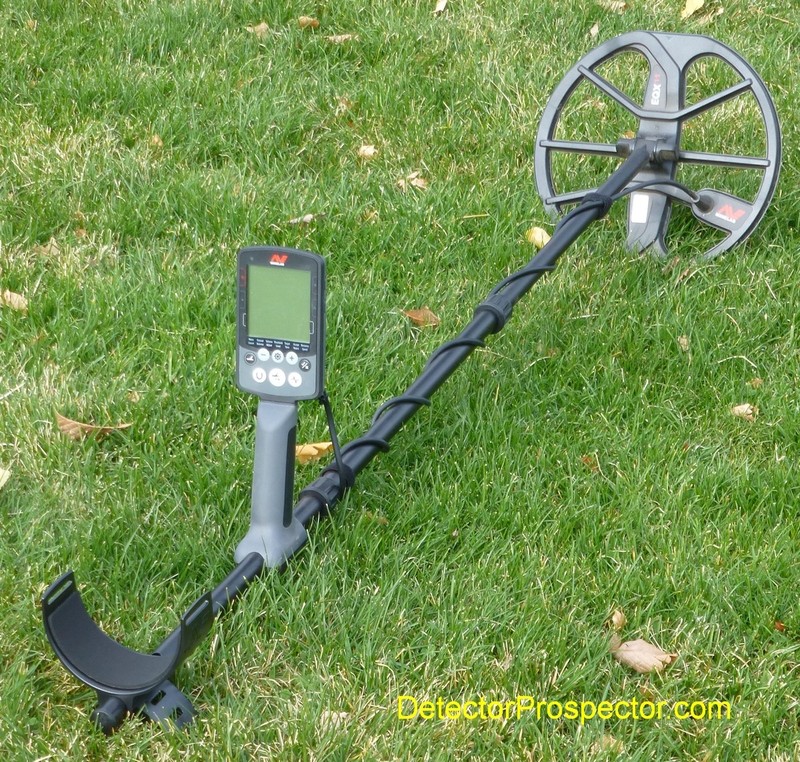 New Minelab Equinox hits the parks for some coin detecting

Anyway, there it is for whatever it is worth. No doubt a few people are thinking "big deal" and that would not surprise me. The only reason I am impressed is the number of hours I have spent with quite a few of the latest and greatest in these same locations, and nothing like this was happening. The main thing I want to communicate is I was not doing anything special, like chasing lots of iffy signals. These with few exceptions were all nice solid, clean signals. Obviously pushing the edge of what the machine will do in this ground, but good signals nonetheless.

Anyone that detects a lot gets quite familiar with their ground and what detectors can do in that ground. We all miss targets, and nearly any ground will give up some good targets to a determined detectorist. The thing is I was no less determined with those other detector models. I only look to prove things to myself, and this little bit of detecting over a couple week span is what convinced me that there is more going on with Equinox than meets the eye. I really am looking forward to others getting these detectors and reporting in because if they give Equinox a chance, I am convinced others are going to have similar experiences. Just remember that Equinox can't make coins appear where none are left to be found. If they are there however, Equinox is going to be the machine I grab from now on to find them. When a detector puts silver in my pocket as easily as happened with me and Equinox, I can't help liking the machine. My goal for 2018 is to find my first gold coin, and to find it with the Minelab Equinox!