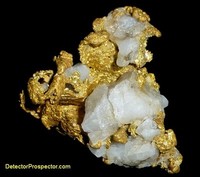 I held off on posting about this one for a bit while I got around to some unfinished business. Since my move from Alaska I have been slow to get another safe deposit box set up. I have always had one for my gold and other important valuables. The problem with posting about this stuff on the internet is it can attract the wrong kind of attention. This is something I would encourage everyone to think about. Now that all my gold and other goodies are residing at Wells Fargo I feel a little more free to post about this.

Chris Ralph and I were prospecting in Northern California not too long ago. I was running the Nokta FORS Gold and concentrating on some areas littered with square nails, cable bits, rusted cans, and other ferrous junk. There were places the Nokta running in dual tone DI2 mode sounded like a machine gun from ferrous low tones. I would go along with the detector going "putt - putt - putt - putt - putt - beep - putt" and on hearing that beep, stop to dig a bullet or some other non-ferrous item.

The weather was a bit wet but not unpleasant; kind of brings the forest smells out and makes for softer walking. I was afraid we were going to get rained out but it keep just on the edge of really starting up. There was not much sign of detecting, no doubt due to all the trash. Chris was off hitting some bedrock with his detector while I wandered around in the trees and duff overlying the old tailing materials.

There was a bit of a mound around the base of a tree and I swept around it getting ferrous tones, when all of the sudden I get a strong non-ferrous beep. I looked down at the target id displayed on the end of the FORS Gold handle and it was showing 82. I thought "That's odd, a coin." I was still not tuned in one what the numbers meant exactly on the Nokta but on a typical 1-100 scale an 82 would be something like a penny or a dime. I have yet to find a really decent old coin since moving south, so I thought I was maybe going to dig some nice silver.

I gave a couple digs and was surprised to see nothing pop up. Hmmm... must be bigger, deeper. So I open the hole up and dig deeper, and this dirty gray lump pops out of the ground. 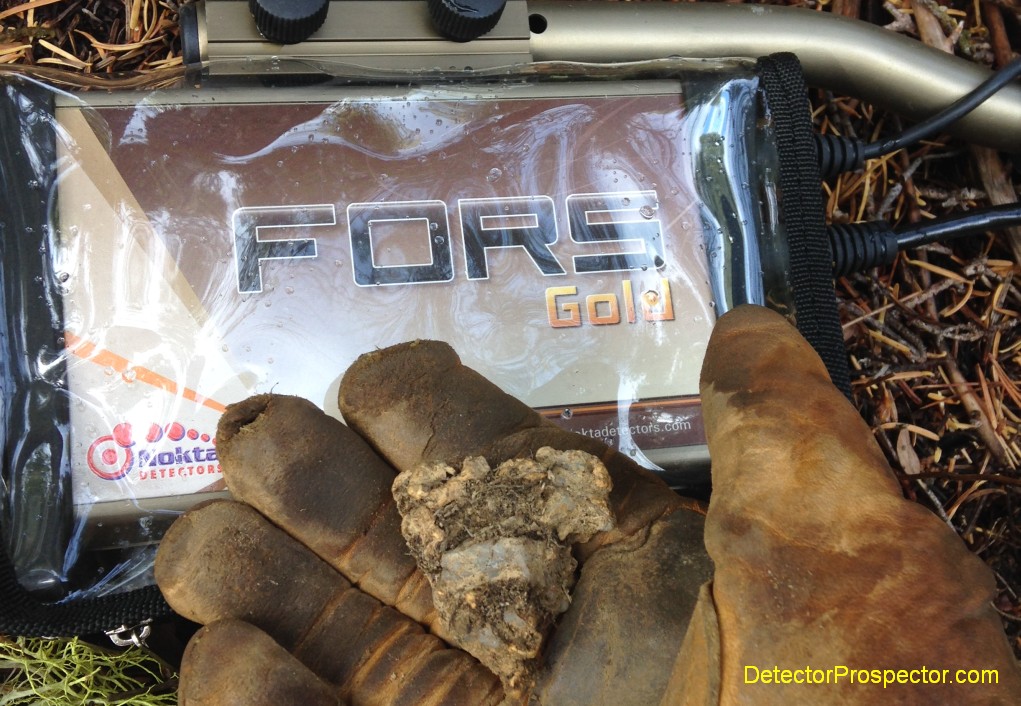 My exact thought "you have got to be kidding me!" It was a filthy lump but I knew instantly it was gold. I could not believe my good fortune. I got out my water bottle and washed it off a bit and saw gold and large chunks of white quartz - I had found something really special. After cleaning it ended up as 1.83 ounces of stunning gold and quartz that would do a museum proud. Just a really spectacular specimen, the best I have ever found. I won't claim that only the Nokta would have found it because any good detector would have. Yet I do think this is a case where a good discriminating VLF detector proved to be of benefit in approaching an area that might cause most pulse induction operators to wander off in another direction.

I cleaned the nugget by giving it a couple trips through my ultrasonic cleaner and picking the roots out with tweezers. An ultrasonic cleaner is perfect for these types of specimens with deeps pits and crevices. Other than that it has not been treated with acid or anything. 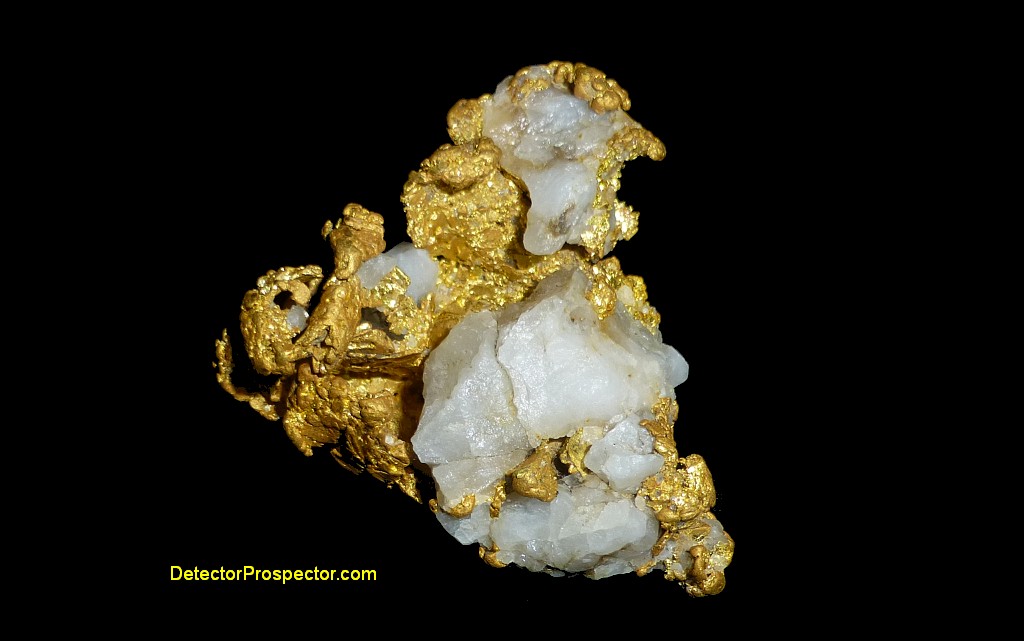 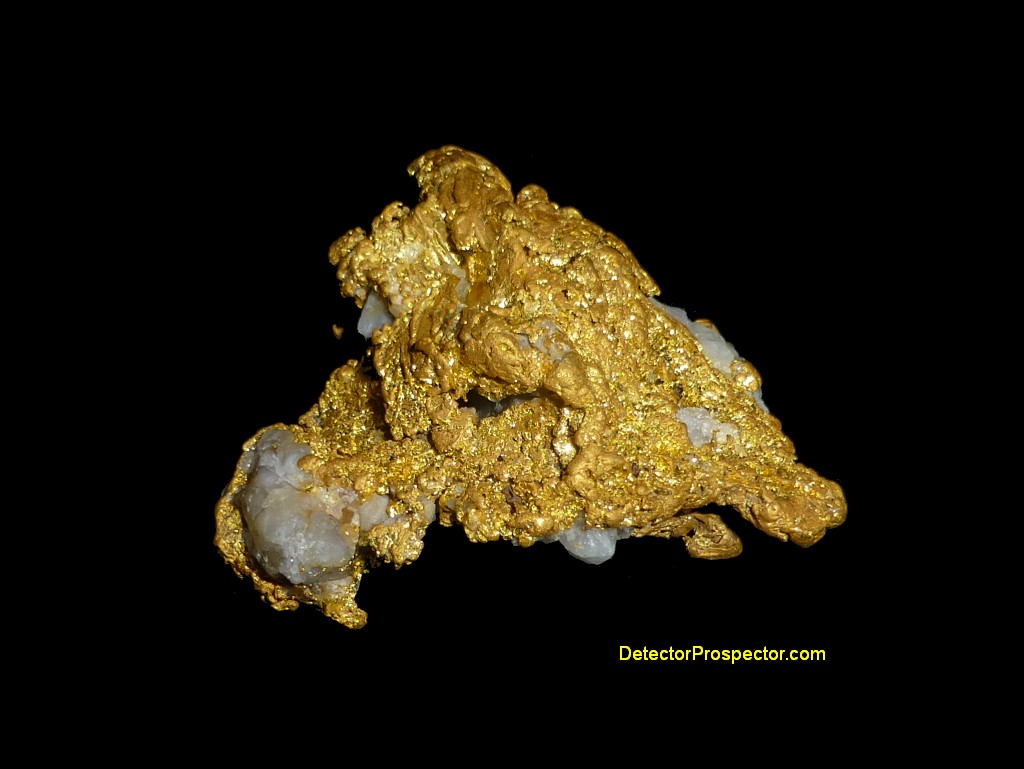 Anyway, this is a fabulous chunk of gold and quartz. One thing that strikes me repeatedly while detecting in Nevada and California is how much nicer the gold is that that I used to find in Alaska. The gold here is generally purer with a richer, more butter yellow color. Many Alaska nuggets are higher in silver content and therefore have paler gold. The quartz in the gold here also tends to be cleaner and whiter. A lot of Alaska gold quartz specimens are discolored with gray and brown quartz variations.

This does matter not just for appearance but for value. Large nuggets and specimen gold can command premiums over the value of the gold content, but that premium is based almost entirely on appearance. It a nutshell, the better a specimen looks, the more it’s worth. There are quite a few places in the western U.S. that produce extremely high quality specimen gold that can fetch premiums many times over the basic gold value.

Alaska, not so much. I have no doubt the quality of my finds had improved since leaving Alaska. This specimen easily eclipses anything I ever found in Alaska for overall beauty. Just a terrific find, one of my best ever!

This article was originally posted on the DetectorProspector Forum and additional commentary may be found there in follow up posts.