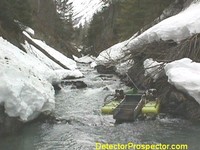 Unseasonably cold weather continues in Southcentral Alaska. The snow at Crow Creek Mine was still 1-2 feet deep Saturday morning, and minor amounts of snow were actually coming down as I arrived at the creek! The good news is that if it was warmer, then the snow melt would cause the creek to be higher and muddier. Even with the cool weather, the creek was up slightly and a little murky, as the photo above shows. The creek did completely open up over the week, and the snow bridges are all gone now.

My dredging was rather uneventful this weekend, and a little on the short side time-wise. I wanted to get home a little early each day because of Mother's Day (good idea to let my wife know I do exist) so I got in about 5 actual hours of dredging each day. This was okay on Saturday, as I picked up a little coarser gold and still managed to get about an ounce. The short hours worked caught up with me Sunday.

I was approaching a small set of rapids with some fast moving, boiling water. The creek was widening slightly at this point, so I decided to tackle the fast moving water by diverting the water to the right and then working up the left side. You can see the small diversion dam in the photo above at the head of the dredge excavation. The idea is to work a channel up the left hand side, then divert the water into the new channel. The material on the right hand side of the creek may then be worked, without having to deal with the fast moving water. Unfortunately, I worked outside the paystreak somewhat, which is more or less centered on the middle of the creek along this stretch. I only picked up .7 oz. Sunday, short of my normal daily goal of 1 ounce. If I had put in that extra couple of hours, I no doubt would have made my goal. This puts the total for the weekend at 1.7 ounces, and the 5 day dredging total 5.8 ounces. I'll have to work my regular hours again next weekend to move the average back up. 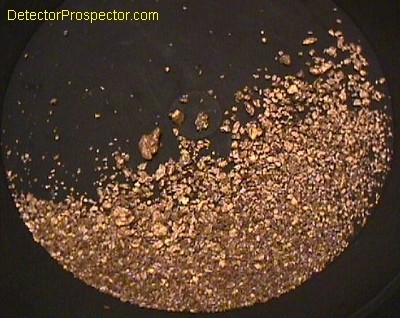 1.7 Ounces of Gold from Crow Creek

So where is all this gold coming from? The ultimate source is a group of historic hardrock mines at the head of Crow Creek valley, discovered around 1909. Two of these, the Monarch and the Jewel mines, produced a total of about 5,000 ounces of gold by 1947. These mines consist of thin irregular quartz veins carrying arsenopyrite, chalcopyrite, galena, sphalerite, pyrrhotite, molybdenite, pyrite, magnetite, and of course, gold and silver. This is a common type of gold ore in Alaska, in that it has a little bit of everything... gold, silver, copper, lead, zinc, iron, and arsenic. The veins are in the graywacke and slate bedrock typical of the Kenai peninsula, are are grouped around some small quartz diorite masses that intrude the surrounding bedrock. The mines do not seem particularly rich, but are listed as having a high mineral potential by the former Bureau of Mines.

Gold eroded from these and other gold-bearing veins was deposited in Crow Creek, mostly before the last glacial advance. Crow Creek is very unique, in that the advancing glaciers did not totally disperse the gold deposits, but instead buried them and left much of the old deposits intact. The original miners on Crow Creek discovered the presence of several deeply buried canyons, and excavated most of these. These deposits were very rich, with material with up to 6 ounces of gold per yard of gravel recorded. A yard of that gravel discovered today would be worth almost $2000. (2011 Update: Over $10,000!) The original bed of Crow Creek exists as a dry channel directly below the Crow Creek parking lot. The creek is now flowing through one of the old excavated channels far lower than the dry channel. Over 250 feet of material was removed to excavate the old channels. Despite the visions of environmental havoc this may cause one to imagine, the excavation has fully grown back such a profusion of trees and other vegetation that most visitors believe they are standing in a natural valley, not a large man-made excavation.

The upper portion of Crow Creek Mine has many exposures of virgin gold-bearing material on both banks of the creek, as well as tailings redeposited along the creek itself. This area is open to the general public for a fee and produces the larger gold nuggets found at Crow Creek Mine. Nuggets of up to 1/4 ounce are fairly common, with nuggets of up to 1 ounce sometimes found. The largest nugget recorded from Crow Creek weighed 3.37 ounces. Almost all the nuggets found with metal detectors come from the upper area. I have found thousands of nuggets metal detecting in the upper area, the largest weighing 7 dwt. and numerous 1-5 dwt. pieces.

The old canyon on the lower claims where I am dredging was mostly mined out, but the waste material form the upper workings was dumped into the canyon. Gold was lost in the tailings due to the large volume nature of the hydraulic mining methods used, and the gold has been concentrated by floods over the years into workable deposits. The gold is more consistent then in the upper areas, but overall of a much smaller size. Larger nuggets are very rare in the tailings, although I did find several, including a beautiful 1 ounce specimen last year. I do find pieces of up to a pennyweight on a regular basis, such as the one in the photo above, in the canyon material. 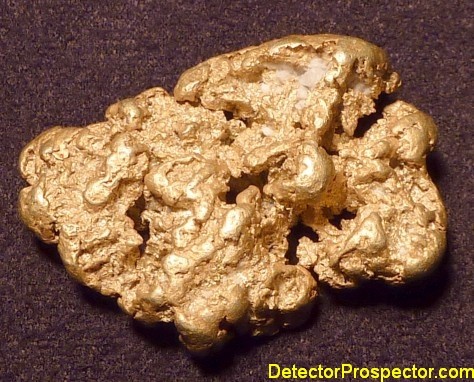