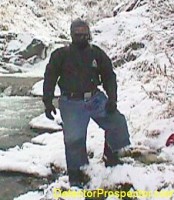 It is winter in Alaska! Maybe not by the calendar, but certainly by the snow on the ground and the ice on the water. Jeff Reed and I decided to make one last mining trip for the season. Snow is falling at low elevations now, but only a few inches have accumulated on the ground. We decided to take a gamble and see if we could drive back into our claims at Mills Creek. There was a chance, however, that we would find too much snow on the road to get back in. The only way to know was to drive down and find out. We decided to take both our trucks, just in case one of us got stuck. We headed out early under cloudy skis. On the way through Portage we passed a cow moose and her calf breaking ice in a pond next to the highway.

I met Jeff at the gravel pit next to the highway where our access road starts out. We decided to take it easy driving in. There was only two or three inches of snow on the road, but that can be enough to cause problems on steep hills. We did not think it wise to be too aggressive getting in, as we might not make it up a couple of the hills coming back out. The drive in, however, proved to be no problem. We arrived at my campsite on the claims just above tree line to find a winter wonderland.

Our plan was to take advantage of the low water conditions to snipe for gold on shallow bedrock. Our claims have quite a bit of exposed bedrock, and relatively coarse gold. Sniping consists of the use of simple hand tools to recover pockets of gold, usually from bedrock cracks and crevices. This is more commonly done above water, but can also be done underwater with the aid of a wetsuit (down south) or drysuits in Alaska. A prospector outfitted with a suit, mask, and snorkel can examine bedrock underwater in search of concentrations of gold. The gold is then recovered using simple tools, such as small pry bars and suction guns. The best (perhaps only) book exclusively on the subject is Underwater Sniping for Gold by Sam Radding & Jim Garlock.

Gearing up for underwater sniping in Alaska is kind of like preparing for battle. Jeff got into his AMDS drysuit while I donned my Harvey's drysuit. We have tried every kind of kneepad imaginable over the years, but never found anything that really stays put in fast water. I finally came up with my own solution years ago, which is to wear an oversized pair of work pants. I sew carpet to the knees with fishing line. The trick is to get a pair of pants with wide enough legs that you can easily slide them on over the drysuit. This may mean a rather large waist size, so I usually use a bungee cord for a belt. I have been using miners moss for the kneepads lately. It does not last quite as long as the regular sluice box carpeting I used to use, but is soft and cushy on my knees. This solution not only protects the knees of the suit, but the entire lower half of the suit. Jeff has adopted the idea, but is a bit more stylish in that he uses a weight belt for his pants!

Next comes the hoods with under caps. A good neoprene drysuit hood, like that made by Harvey's, is all that is needed, but we both use Henderson Ice Caps also. The ice cap is a thin under (or over) neoprene hood used in addition to the regular hood that covers your face completely, except for the eyes and a small opening for the mouth. Once a mask, snorkel, and gloves are put on, the only part of your body touching the water is your lips. The gloves can be five-fingered for some people, but three-fingered mitts are warmer in extreme conditions. I coat the entire working area of my gloves with a thin coat of Aqua Seal brand sealant. A little of this stuff goes a long way. Too thick an application will result in a glove that is stiff and tiring to use. 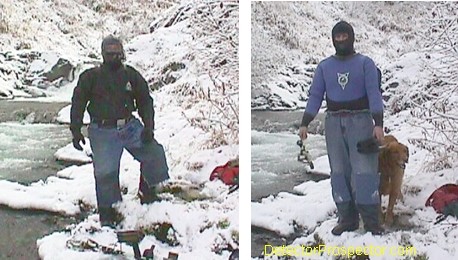 Our sniping kits are similar. I use a cheap nylon rucksack to carry the gear. I have an 18" chisel-edged pry bar and a large screwdriver for prying crevices. I also have a small screwdriver, some very large crevice tweezers, a set of fine point tweezers, and a snuffer bottle. The main tool is a suction bulb. These are similar to the snuffer bottle idea, but with a squeeze bulb and a larger intake tube. I sometimes bring along a larger unit made out of a modified grease gun, but find the little bulb unit gets the most use. Finally, I include a 10" gold pan and a large plastic vial in my kit.

The process of sniping is actually simple, and can be a lot of fun. You can recover quite a bit of gold by sniping in itself, but it serves an even more important role as a prospecting method to locate future dredging ground. In areas where dredging is prohibited, sniping may offer the only way to recover gold from some streams and rivers.

The picture shows the area we were in. There is bedrock outcropping on both banks and in the creek. I usually leave everything in my rucksack on my back, except for the 18" pry bar. I jump in the water and thoroughly examine all the bedrock I can get at. If there is a bit of sand and gravel on the bedrock, it can be scraped aside and "fanned" away by waving a hand at it rapidly underwater. Any interesting crevices, no matter how small, should be investigated with the pry bar. Other tools can be pulled out as needed. When any gold is located, the snuffer bottle or suction bulb is used to recover it.

I spent quite a bit of time in the area around the falls, finding a bit of gold here and there, but no major concentrations. Jeff wandered on down the creek, and I followed a little later. He had his head stuck in a pool behind a rock, and indicated he was finding some nice gold.

I kept scouting around, finding an occasional flake, but a good crevice eluded me. It is possible to find single crevices that will produce a few pennyweights of gold, and sometimes a hot set of crevices can produce an ounce or more of gold. This area is at the upper reaches of the coarse gold deposits on Mills Creek, however, and the gold is a bit sparse.

I looked up the creek, and Jeff still had his head in the same pool. I knew something was up... he would not stay put unless the gold was good. I came up, and with a big smile he dumped what he had so far in his pan. A few pennyweights of chunky gold looked back up at me from his pan, and I must admit I was a bit jealous. I had only little flakes to show in return. Jeff indicated the pocket was working out, though, and pretty soon he headed downstream.

We continued on, but neither of us got into any other hot pockets. Jeff saw a couple of spots he wants to come back and check next summer. My main goal is to put my dredge on the corner where Jeff located the best gold of the day. It is in the area I am actively working, just upstream of my last dredging location. There may be more gold under the deeper overburden, or it may simply be a single pocket of gold, now worked out. I'll have to wait for next summer to find out.

So ends my gold mining for 1999. Overall, it was not one of my more productive summers for total gold found, but for fun it was tops, as I think my entries for the summer show. A determined dredger can work through the winter, but frankly I am not so gung-ho as to fight the cold for a few ounces of gold. Better to wait for summer to return again.

Jeff ended up with about 1/4 ounce of nice nuggets for the day. I had a fairly pitiful showing of small flakes and a half pennyweight nugget. I would have liked to finish the year with a bit more of a bang, but so it goes. This is two trips in a row that Jeff has kicked my fanny in gold production, so I can't wait for next year and a chance to show him up in return. The gold will wait under snow and ice for us until then! 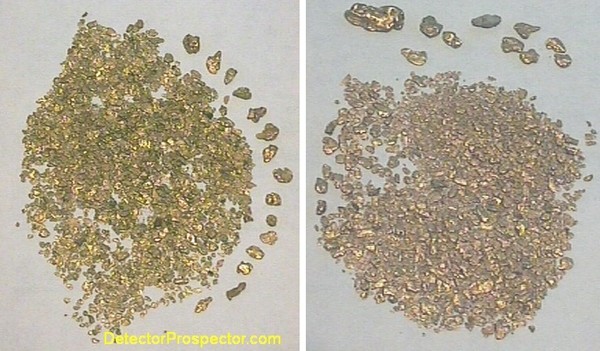 P.S. I get a lot of comments on the color of the gold in my photos. Please keep in mind these are digital photos, and have often been lightened (as in the photos above) or darkened. Most gold around Anchorage is about 85% pure, and had a nice yellow color, but is much paler than much of the California gold I have seen. Crow Creek Mine gold is of lower purity, usually 70-75%, and so has a lighter color than the Mills Creek gold on the right. I have some gold from Crow Creek that has enough silver in it to qualify as "white gold" or more properly, electrum.