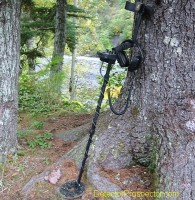 I became aware of a new detector that was going to be introduced awhile back. The Shadow X5 by Troy Custom Detectors. The X5 is not intended as a nugget detector per se, but as a general purpose high performance metal detector. What caught my eye was the operating frequency, which at 19 kHz is much higher than the 6-10 kHz commonly used in many coin detectors. That, and the fact that it has a manual ground balance. This led me to believe the detector might make a very good all-around detector for someone wanting to both coinshoot and nugget hunt.

I received an initial unit, and my bench tests confirmed this was the case. The Shadow X5 is much more sensitive to small gold than most coin detectors, and in fact I will go so far as to say that it will pick up gold the vast majority cannot. Its gold performance is right up there with the best of the dedicated nugget detecting units, and is better than a lot of them.

Still, what was needed was a field test. I planned on getting out to Crow Creek over the weekend to test the X5 on small gold. Troy Galloway was kind enough to send up his new 7" concentric coil for me to use, so I was raring to go.

Well, my weekend did not go quite as planned. I ended up working Saturday, got tied up Sunday, and so took Monday off to go to Crow Creek Mine to test the Troy Shadow X5. Then I made the mistake of stopping by work Monday morning, and got caught. We were short handed, and so I worked again.

By Tuesday the good weather was gone, and a light rain was falling. Plus, I found I had picked up a cold. But I was anxious to give the X5 a spin, and so headed off to Crow Creek under gloomy skies and with a runny nose. The place was empty when I arrived... nobody but Sean around. I set the X5 up with the 7" concentric coil I had been sent, and headed up the creek. 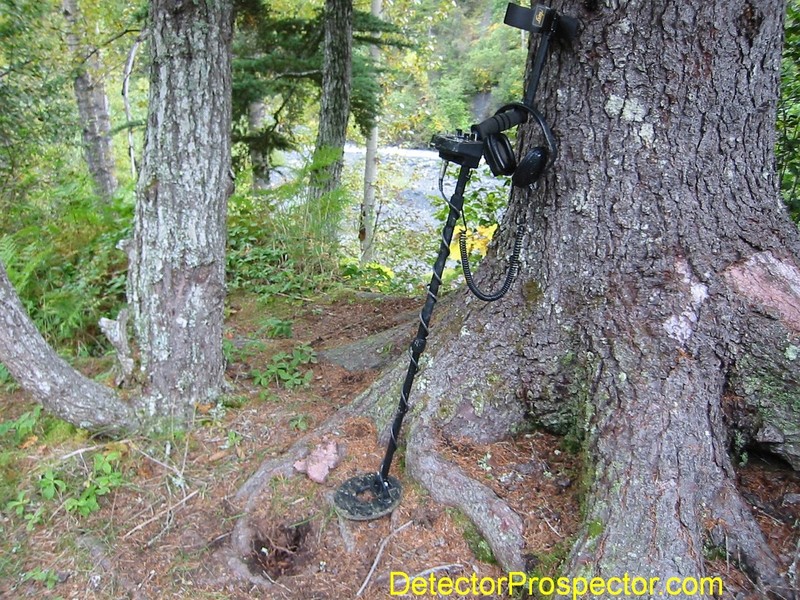 I stopped at a knoll not too far up the creek, and tuned up the X5. In all-metal mode there are few controls to play with. I turned it on, and set the sensitivity at max. Set the threshold for a bare sound, then pumped the coil and ground balanced. Although the ground balance control is a ten-turn knob, I found it took short adjustments to get the machine tuned for a slightly positive response as the coil approached the ground.

I started scanning, and the X5 was very smooth, even though I had it set at full sensitivity. It only took a few minutes, and I got a nice little signal. A bit of work with my plastic scoop, and there was a small flake that later weighed in at 0.6 grain (480 grains per Troy ounce). The coil is very resistant to false signals, as I rubbed it in the soil and knocked it against rocks with no problem.

In short order I found two more small nuggets, weighing 0.6 grain and 1.0 grain. I then wandered up the creek to a clay layer that usually give a bit of trouble with high-frequency detectors, and located another small nugget, weighing 0.7 grain. Also a small piece of lead shot weighing 2 grains. At this point, my cold and the rain were wearing on me, and I had found out what I had come for, so called it a day. Without splitting hairs I'd say I can easily find gold down to about 0.5 grains at up to a couple inches with the X5 and 7" concentric coil. Very impressive! The machine should do even better with smaller coils.

Those unfamiliar with nugget detecting may wonder why finding these tiny gold pieces is important. After all, it's the big nuggets we are after, right? The fact is that in some areas all there is to find is smaller gold. Even in areas with larger nuggets, the ability to find small gold can help prevent boredom from setting in. But the bottom line is that most any detector can find a very large gold nugget. It's the ability to detect small gold in mineralized ground that really sets the gold machines apart from the more common coin type detectors.

Anyone familiar with the Fisher Gold Bug or Gold Bug 2 will feel immediately at home with the X5 in all-metal mode. The machine is more sensitive than the 19 kHz Gold Bug, and actually reacts more like the Gold Bug 2. Small hot rocks and the clay layer were giving some responses that most lower frequency detectors would not. The response on small gold is more mellow than the somewhat harsh, loud response you get with the Gold Bug 2. A very pleasant audio tone, actually, but one that requires a bit more attention than with the Gold Bug 2.

When run at max sensitivity, the detector acts more like a higher frequency detector than a 19 kHz machine. This is good when we are talking sub-grain gold. I also noted that I was getting faint responses on rocks that normally only my Gold Bug 2 or GMT with small coil will respond to. I suspect that in more mineralized ground, or in areas with hot rocks, the X5 will get more ground response than one would expect of a 19 kHz detector. I'm sure the sensitivity will have to be backed off in places like that. I'll be curious to hear what detectorists in more mineralized areas think of the X5. It's a rare area where you can run detectors maxed out like I do at Crow Creek. 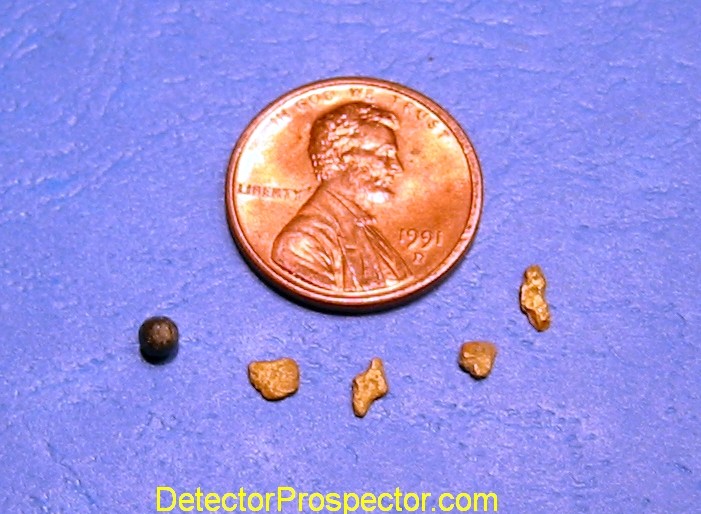 The 7" concentric coil only seemed marginally more sensitive than the stock 9" coil to small gold. I would pass on it and wait for the 5" concentric due soon if small gold is the goal. There is also a 10" elliptical DD coil in the works, which may help address some of the ground response issues at higher sensitivity levels.

I did find a couple nails, and when I switched to the discrimination mode I found it took a minimum setting of about 2.5 on the disc knob to get them to audibly "break-up" and read bad. Unfortunately, the gold weighing under a grain also wanted to be ignored. This is not surprising, however, as sub-grain gold is smaller than most detectors can find at all. The X5 is very hot in its disc mode, and for larger gold running more than a few grains should see good use in iron infested areas. I'll have to explore this more in the future. But for the tiniest pieces of gold, I'd stick with the all-metal mode.

Again, I must mention the X5 is not really a nugget detector, but an all-around unit. It has many features intended for coin, jewelry, and relic hunting. I have not touched on these features here, and will leave it to the coinshooting crowd to decide how the X5 works for them. The machine should really excel on gold jewelry for freshwater hunters, as the features that make it great on small gold nuggets should prove valuable for earring studs, small rings, and thin gold chains.

To sum up, my initial reaction to the Troy Shadow X5 is very positive. It was a pleasure to swing a detector that only weighs 2.5 lbs. total, and the weatherproof design made for worry-free detecting in the rain. The nugget hunting features are very basic by today's standards, however. I don't want anyone to think I'm pushing the X5 as the latest thing in nugget detectors. But it really is one of the few units I've used that can really claim to "do-it-all". The Shadow X5 packs real power into a small package, and serious detectorists would do well to keep an eye on this detector.