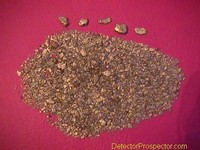 One of the best things about Crow Creek Mine is its closeness to Anchorage. It lends itself to what I like to call "commuter gold mining". The mine is only 45 miles from my doorstep, so rather than camp, I normally drive back and forth daily. Dredging is hard work, and the value of a hot shower and a real bed are not to be underestimated.

I left my house about 7:30 AM Saturday morning. The first day of May, and we had actually had snow overnight! Luckily the amount was very small, and the roads were clear. I made my stop at the gas station and filled up my jug of dredge fuel, and then headed for the mine.

This picture below shows that the snow had melted very little from the previous weekend. I put on my drysuit in one of the cabins, and returning to my truck I found a cow and her calf had wandered up the road. Moose are relatively rare at Crow Creek, so it was fun to see them. I tried to sneak around them to get to my truck, so I could get my camera. Mama Moose kept an eye on me, and looked at me over my truck as I opened the door. Unfortunately, she and her calf headed away as I finally got to my camera, so another close-up photo got away.

I started dredging about 9AM. Conditions were perfect, and so I mined continuously through the day, with just a quick snack for lunch. I finally quit about 6PM because the water started getting murky from snowmelt upstream. I managed to get about 8 hours of actual dredging in, and was rewarded with about 2 ounces of gold. A very good day!

I got out of the house about 6:30 AM Sunday, and repeated my routine. On the way up Crow Creek Road, I happened upon a spruce hen (grouse) scratching in the road. These birds generally believe if they don't move they are invisible, so it is easy to approach them. 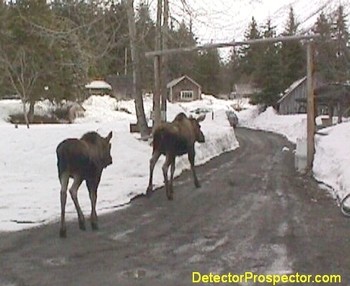 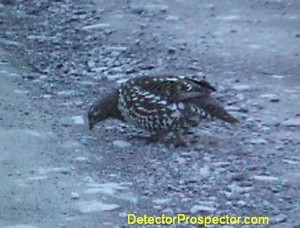 It was rather cold for May; water splashing on my dredge was freezing, so I guess it was about 30 degrees. The sun came out, and it proceeded to warm up. I kept working up the creek, but found I was getting walled in by all the snow around me, so I stopped and hacked away at the snow for awhile. Suddenly, the creek went from clear to muddy brown. The warming temperatures must have caused a small mudslide upstream, instantly creating a zero-visibility situation in the water.

I used to dredge in this kind of water. In fact, Crow Creek is muddy with glacial silt for the entire summer. I have gotten spoiled on clear water dredging to the point where I just don't enjoy dredging by feel anymore. The nice thing about working in clear water with a mask, is that you can see gold as you work along. It is a great motivator, and allows one to stay in gold bearing material to a greater degree. The gold deposits are limited in size, especially width. It is good to know when the gold runs out, so time is not spent moving worthless material. Another benefit is that the dredge nozzle is rarely clogged when you can see what you are doing, as rocks are removed before they cause a problem. Dredging blind results in more clogging of the nozzle and hose, which can be frustrating.

Mudslide upstream mucks up the water, and Steve in Harvey drysuit

I decided to quit for the day. I was a bit beat from the long day before, so I was not that unhappy. I ended up with about 3.5 hours actual dredging, and about 3/4 ounce of gold. Not bad for a very short day. I was cleaning up the site when my friend Ben showed up to see what I was doing. I rarely get pictures of me when I'm mining, so he took a picture of me in my Harvey's drysuit.

The total for the weekend came to 2.7 ounces, for a grand total of 4.1 ounces in two weekends. All I need to do is keep going at this rate, and with a little luck I'll have my first pound (12 troy ounces) of gold for the year in four more weekends. The largest nugget in the photo below weighs just over a pennyweight (1/20th ounce) and is small fingernail sized. 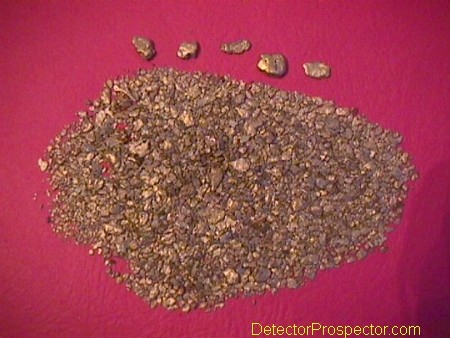 My cousin Cathy emailed to ask "So what is this all worth"? Good question. People tend to divide the gold by the hours spent running the dredge, and get an unrealistically high figure. My gold mining is a business, with all expenses reported as deductions and all gold sales as income. I was once crazy enough to go dredging for a living for a couple of years, and learned quickly this is no way to get rich quick.

A troy ounce is further divided into twenty pennyweights (abbreviated as dwt.), and each pennyweight into 24 grains. These are the same as the grains used on powder scales. So, 1 troy oz. = 20 dwt. = 480 grains. A U.S. copper penny (not the new zinc plated variety) weighs two pennyweight, or 1/10th troy ounce.

Gold is currently $285 per oz. (5/3/99) so my 4.1 oz. is theoretically worth $1168.50. It is, however, more complicated than that. First, there is the price of the gold itself. The quoted price of gold is for 99.999% pure gold bullion, not gold in it's natural form. Natural gold generally is 80%-90% gold, the rest being silver and other impurities. If gold is sold to a refiner, you are only paid for the actual gold value. Crow Creek gold is of a lower than average purity, running about 72% gold. If sold to a refiner, it is worth about $205 per ounce. Assay and refining fees lower this figure even more, making this the option of last resort for the small miner. Larger operations, with productions of hundreds or thousands of ounces generally go to a refiner, as the fees are a lower percentage of larger gold quantities.

Luckily for the small miner, gold in its natural form is very rare, since most gold is refined. Gold nuggets, in particular, are valued as gemstones rather than gold, and their value has much more to do with their rarity and the general character of the nugget. A one ounce gold nugget is rarer than a 4 carat diamond. Sold directly to individuals, this type of gold is literally worth what you sell it for. I feel the best indicator today is the price of natural gold as sold at various sites on the Internet. Prices on the Internet find their final level according to the worldwide demand for gold in it's natural form. A review of various sites reveals that gold nuggets are going for $500 to $700 an ounce, with choice specimens bringing as much as $1000 to $2000 per ounce. Many sites on the Internet are selling gold by the gram, so remember there are 31.1035 grams per troy ounce.

2012 Update: As the price of gold increases the premium paid for natural gold tends to decrease. The high price is in itself the premium. When people ask me why they can't get a big markup over the spot price these days I point out to them the price has gone so high so fast they are money ahead no matter what these days. Still, a very good premium can be had for choice nuggets and specimens. They just have to be truly exceptional.

I pay a percentage of 25% to Crow Creek Mine of all the gold I recover from the creek. Usually a claim owner gets 10%-15% of the total, but Crow Creek is worth the higher percentage because of it's easy access, and the support I receive from the mine owners. Keep in mind a normal visitor pays a much lower fixed fee, with the miner keeping all he finds. I and a few others work on percentage because we have access to closed areas of the mine, and because we find more gold than the typical miner. I will be working my own claims on Mills Creek later this summer. I keep all the gold I find, but generally only average 1/4 to 1/2 ounce of gold per day. So it is, that even after the percentage I pay, I still end up with more gold per day at Crow Creek. This is very important to remember. It is generally better to pay for access to good ground than to keep all you find from poorer ground.

Therefore, of 4 ounces mined, I will give Crow Creek 1 ounce. Since the gold I am finding is on the smaller side, I will probably get around $450 per ounce for it on the average. So far I've worked four days, with an average of ten hours per day. 3 ounces X $450 / 40 hours = $33.75 per hour gross ($1350 total). All expenses, such as transportation, gas, equipment costs, selling costs, etc. must be deducted from this. Overhead for a dredging operation is fairly low, but it does take it's toll. And finally, yes, taxes must be paid on the final profit. I turn a small, but regular profit almost every year on my mining operations.

2012 Update: Wow, at today's $1700 an ounce prices I would be making some serious money doing this today. At today's price I would be making over $100 per hour!! Sad story is I and others mined out nearly all of this very rich material since 1995, or I would be back down there right now. I keep hoping for another super flood to reconcentrate the gold at Crow Creek but so far 1995 was the last time stuff really moved in the creek.

The final catch is that Crow Creek is the best place I mine. Most other areas I mine have a lower return for the time spent. Also, keep in mind that as a weekend warrior, I high-grade the deposits. In other words, I take out the richest deposits and leave the poorer grade material behind. Doing this full-time, one can expect lower average returns due to the need to not work yourself out of ground too quickly. Also note that I counted my first Saturday in the overall hours worked. This time truly must be counted, and if a person mines gold for a living it is these kinds of non-productive work days that really eat into your profits. Downtime is the final factor. Any miner that spends a lot of time in the field will eventually have equipment failures and shutdowns due to floods and other factors. The bottom line is gold mining is not a way to get rich quick, and in fact most miners go broke. Small scale mining is best approached as a money-making (hopefully) sideline. Don't quit your day job! I speak from experience. 2012 Update: Still true today. The high price and television shows are creating all kinds of interest but the fact is it is hard for one person to make a buck gold mining.