The Minelab GPZ 7000 was introduced in 2015 and is still in production. “This revolutionary new ZVT technology far surpasses GPX detectors for detecting deep large nuggets AND finding gold at any depth. The GPZ 7000 will open up the  gold fields again.” -Bruce Candy, GPZ Inventor

"I have been using the Minelab GPZ 7000 for some time, first as a tester prototype versions, and now as an owner of one of the first production line models. I did not find the GPZ 7000 to be a detector that immediately wowed me. Instead, it is a detector that reveals itself with use. However, I did finally have my Eureka Moment with the GPZ 7000 and after that there was no turning back. I sold my Minelab GPX 5000 and the large collection of accessory coils and other options I had accumulated for it. I am fully convinced that using the GPZ 7000 in the future gives me a better chance of finding gold, especially certain types of gold previously undetectable by other detectors." - Steve Herschbach

The GPZ 7000 housing is obviously based on that used on the earlier Minelab CTX 3030 model. The battery is slightly larger and has twice the capacity of the battery on the CTX 3030. The batteries are compatible with each other (you can use the smaller CTX battery on the GPZ 7000) and use the same charger system.

The GPZ 7000 is fully weatherproof and the GPZ 14 coil is fully waterproof to 1 meter. New coils, when purchased, will come with the short lower rod section attached plus an included scuff cover / skid plate. Currently the GPZ 7000 has only two coils available, the stock 14" x 13" GPZ 14 Super D coil, and the 19" x 18" GPZ 19 coil. Rumors persist of both a small coil in the works from Minelab, plus possible aftermarket coils. The coil that comes with the GPZ 7000 is remarkable however in the combination of sensitivity to small gold and depth on large gold that it covers. 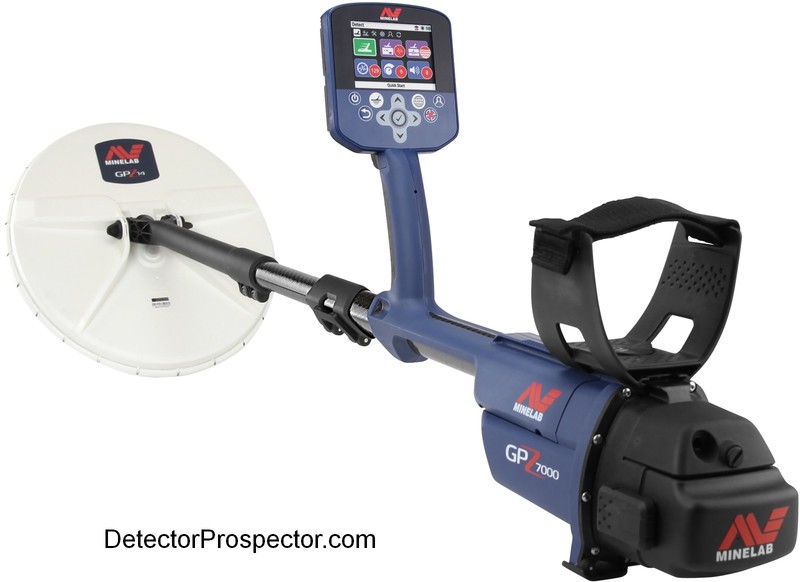 I am fortunate to have had the opportunity to field test the new Minelab GPZ 7000 detector. It allowed me time to make decisions regarding my own use of detectors earlier than most people. It also gave me a place first in line and I now have a brand new GPZ 7000 of my own.

My use of the GPZ 7000 combined with what I think I know about how it works made me decide I had to have one. I am in my detecting prime right now and plan on spending a huge amount of time swinging a detector looking for gold now and in the future. I will never use just one detector for everything but the fact is that I can only swing one detector at a time. I need to decide what detector will be my primary unit for the bulk of my detecting. What one machine will best return my investment of time and effort in possible gold finds? I have decided that machine is the Minelab GPZ 7000.

The GPZ with its 14" x 13" Super D coil provides an across the board powerful solution for getting gold both large and small on the first pass. Most ground I pass a coil over I have exactly one chance of finding a target. It has to happen on that first pass. Sure, when I am beating a patch to death I may hit the same area over and over. But most of my detecting is all about being over ground I have never been over before. I have to have confidence the machine I am using is going to give me my best shot at getting whatever is there on the first and likely last pass of the coil.

As far as I am concerned all the percentages and charts and stuff is something others can debate, though I will post some thoughts on that separately. The bottom line is I am convinced the GPZ 7000 does give me a technological edge at this time, and that by applying that edge early and as often as I can I am increasing my odds of finding gold. If I never said another word about the detector that really just sums it up.

I thought very hard about whether I should keep my GPX 5000. I decided any time spent with it would detract from the advantage I would enjoy by using the GPZ instead. It should not have been lost on people that I sold my GPX 5000 and almost every accessory I owned for it. That alone should tell you everything you need to know about what I think of the GPZ 7000.

I even sold my SDC 2300. I was tempted to keep it until a smaller coil becomes available for the GPZ. Small coils are a must for nooks and crannies and other places larger coils can't fit. Yet as I considered it all I had to question just how much use the SDC 2300 would get if I had access to a GPZ 7000, and the answer was not very much. It found a new home.

The GPZ 7000 does not replace or take away from the SDC 2300 and GPX 5000 in the current Minelab lineup. They are both fantastic units. The GPX 5000 and its vast ecosystem of coils and other accessories remains the no-brainer best value for many people. The SDC 2300 will continue to be the hot small gold sniper it has been proven to be. A person who owns both will have much of the power of the GPZ 7000 already at their disposal.

The thing is the GPZ 7000 to the best of my determination so far seems to offer almost everything those two models offers in a single unit, and then goes farther yet. I can't swear that under every circumstance and in every scenario that the GPZ 7000 trumps the SDC 2300 or GPX 5000. Certainly in the case of the GPX 5000 all those accessory coil options do matter, especially where ground coverage is job one. The SDC does have that little coil.

All I can say is that for that proverbial one pass over any particular chunk of ground I have to pick the GPZ 7000 as my best bet for getting whatever gold is there or missing it forever. And for hitting already hunted ground it is going to find gold both those detectors will miss no matter how many times they pass over the ground. The GPZ 7000 in my opinion is the best overall single solution available. If I was told I had to sell all but one machine and could only use one detector for gold prospecting I would without hesitation choose the GPZ 7000.

In closing, I suddenly see a bright future ahead. I really had given up on there being anything significantly better than a GPX 5000. The GPZ however is not the end of the road but just the beginning. As good as it is it is not perfect and I am certain we will see further improvements as the platform is refined in the future. That first step is often the biggest and the GPZ in its way is every bit the breakthrough the SD 2000 was when it was released. Nobody can put back all the gold that has been detected in the twenty years since but the GPZ 7000 is definitely the next step in getting what is left.

My thanks to Minelab for being able to say I had a part in this, small as it has been. Thanks especially for investing the huge amount of dollars and people power it took to make this happen for us, the prospectors of the world. Were it not for Minelab electronic prospecting would not be near what it is today.