The Tesoro Compadre metal detector was introduced in 2000 and ceased production in 2018. It is a 12 kHz VLF metal detector aimed primarily at coin, jewelry, and relic detecting. Note that the coil on the Compadre is hardwired and not interchangeable. You can choose from one of two coil options at the time of purchase, a 5.75" or 8" concentric coil.

"The Tesoro Compadre was designed with the idea that less is more. This modest machine can do a lot of the same things that its bigger brothers can do. It works great for coin hunting, competition hunting and relic hunting, but it does it without any excess knobs. Switch on the detector and you’re working in a silent search, motion all metal mode. The farther you turn the knob, the more discrimination you can bring to bear on those trashy sites.
The Compadre has it all. One knob simplicity for the beginner and high gain circuitry and the famous Tesoro ED-180 discrimination for the advanced user. If one detector can do all of this, maybe less is more. The Compadre is available with a 5.75" Concentric Searchcoil or with an 8" Concentric Searchcoil." Source: Tesoro 2007 catalog 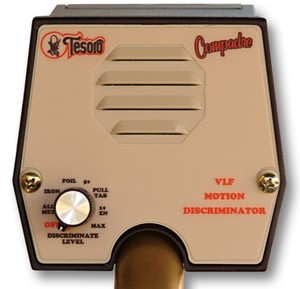