The XP Deus metal detector was introduced in 2009 and is still in production. The Deus is a VLF metal detector aimed primarily at coin, jewelry, and relic detecting. The Deus was revolutionary at the time it was released due to its very light weight, integrated wireless headphones and wireless coils (unique to XP), and an exceptionally fast recovery time. The Deus sets a current standard for relic detecting and is extremely popular in Europe in particular. The Deus is a "selectable frequency" detector that lets you select one frequency to use from several options. The XP Deus can run at any one of four frequencies - 4, 8, 12, and 18 kHz.

"DEUS marks a technological breakthrough and is a real innovation in metal detector design. Its patented architecture is based on three elements: A Coil, a Remote Control and a set of Audio Headphones, which are unique in that they communicate with each other via a digital radio link. The search coil contains the essential components for processing the signals, which no longer need to be conveyed via a wire link but are digitised and analysed directly at source by an ultra-miniature digital circuit, which greatly improves the quality of signal acquisition. This circuit, which is integrated in the detection head, processes the information and sends it to the headphones and remote control in real time via a radio link." Source: XP Deus Brochure 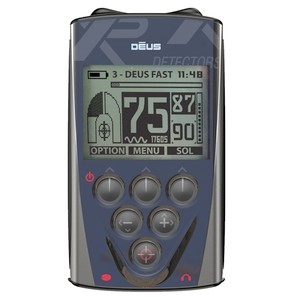