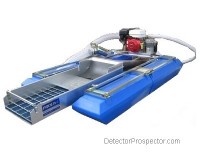 A suction gold dredge is basically an underwater vacuum cleaner. Material is transported from underwater to the surface and run through a sluice box to capture the gold. A sluice box works because gold is 15 times heavier than sand and gravel and so is easily trapped by the riffles and carpet in the sluice box. Dredges almost always need to be mounted on a set of floats. This is because a dredge has just enough power to lift water and gravel to just above the surface of the water. Every inch of vertical lift above the surface of the water robs power/suction from the system. Floats are also needed because there is rarely a nice gravel bar in just the right place to set up a dredge without floats.

Manufacturers rate suction dredges by the inside diameter of the main suction hose. So a 5" dredge has a main suction hose with a 5" inside diameter. However, nozzles are used on dredges which restrict the intake to a size smaller than the inside diameter to help prevent clogs. A 5" dredge may have a nozzle opening of 4" for this reason. The volume of material processed is determined by the nozzle opening, not the inside diameter of the hose. Therefore most dredge permits refer to the nozzle size, not the hose size, when imposing rules and restrictions. This is a very important thing to remember when working with permits. What a dredge manufacturer calls a 5" dredge may be a 4" intake nozzle dredge for permitting purposes. Nozzles sizes may be up to 2" smaller than hose sizes.

A gold dredge is powered by a motor and pump. A common misperception is that gravel is sucked through the pump. The pump actually pumps only water, which is delivered to a venturi type device (called a power jet or a suction nozzle) which indirectly creates suction in a larger hose. The solves two problems. First, gravel pumps are very expensive, heavy, and high maintenance items. Second, a 2" pump can easily be used with a venturi to create suction in a 4" hose, greatly increasing the volume of material that can be processed. 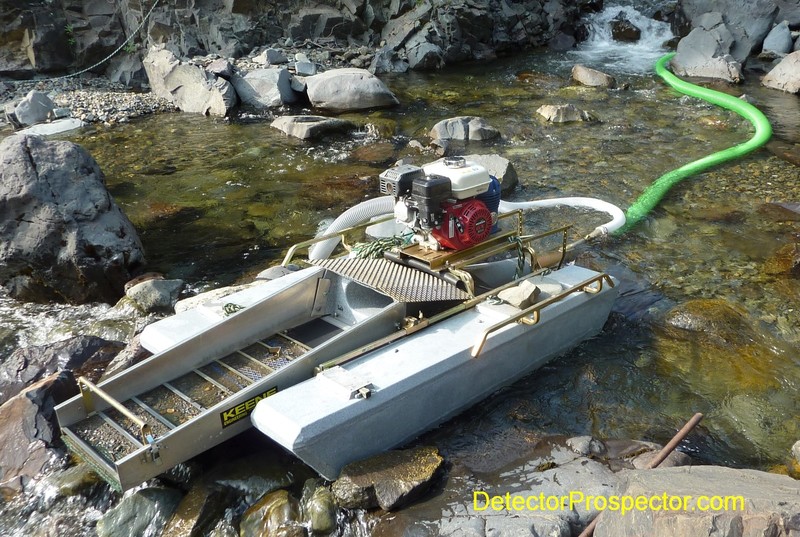 In normal operation a gold dredge is run by an operator at the intake nozzle who directs the nozzle and who captures and discards oversized rocks that would plug the intake hose. A properly set up sluice box does not need tending - all the material sucked up passes over the riffles with no extra attention needed by the operator. The operator can therefore stay at the nozzle and process material until the motor runs out of gas and needs refilling. The sluice box normally need not be cleaned out more than once a day at the end of the day. The riffles and carpet are removed and all material (concentrates) in the box washed into a tub and panned out with a simple gold pan. Larger dredges may employ gold wheels or other devices to aid in the cleanup of the concentrates.

The diagram below shows a basic suction dredge flowchart. The foot valve is a one way valve with a screen. Nearly all dredge pumps are not self priming because the mechanism that enable self priming results in a less efficient pump. Simple fire fighting type high pressure, high volume pumps are employed which need to be primed before starting the motor. This explanation from Keene Engineering:

"Before starting the engine, the pump must be fully primed. This means the pump must be full of water and all air removed. All jetting pumps provided with our dredges have a mechanical water pump seal. Without the presence of water in the pump, friction could cause a seal to overheat and require replacement. Priming the pump on some of the smaller models is accomplished by thrusting the foot valve back and forth under the surface of the water in a reciprocating motion. This will cause water to become pumped into the foot valve assembly into the pump. A pump is fully primed when water is observed flowing out of the discharge end of the pump. It sometimes may become necessary to hold the discharge hose above the level of the pump to complete the priming operation. The larger dredges that have a rigid foot valve, are easily primed by removing the cap provided on the foot valve and filling, until water overflows. Caution must be exercised to prevent sand from entering the foot valve or intake portion of the pump. Excess amounts of sand could dam age the water pump seal, or pump impeller. It is recommended that the intake portion of the foot valve be placed in a sand free environment underwater." 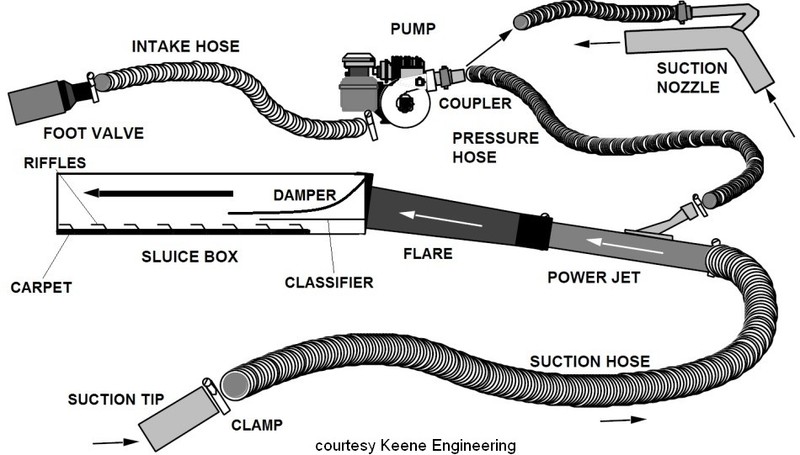 The intake screen prevents large items from entering the pump, but sand can still pass through and cause excessive wear over time. Place the foot valve on rocks, in a bucket underwater, or strap it under the floats to keep it off the bottom and out of sand. Once a system is properly primed the one way valve retains the prime even if the pump is shut off, allowing for easy restarts. If the foot valve is allowed to suck air and the prime is lost, shut off the pump as quickly as possible to prevent damage to the pump seal. It is a good idea to always have a spare pump seal as once one is damaged the dredging operation will be at a standstill until a new one is installed.

Power jets take less hose and are more efficient so therefore very common. However, care must be taken to not suck air into the main suction hose or the system will stop working until all the air is purged from the hose. A suction nozzle keeps water in the system at all times and so is preferred for shallow water use where sucking air into the nozzle is inevitable. Suction nozzles are rarely seen as a stock item except on 1.5" or 2" dredges and must be added as an accessory item on larger dredges.

The main suction hose is attached to the intake end of the power jet. It varies from 10 feet long on small dredges to 20 feet or more on larger dredges. A suction tip is fastened into the intake end of the hose which has a reduced opening to help prevent hose clogs. The discharge end of the power jet plugs into a flare. The flare widens the flow of material out to the width of the sluice box, and in doing so slows the speed at which the material enters the sluice box.

When the material enters the sluice box it passes over a classifier screen and under a damper. The damper is usually a large sheet of rubber best seen in the photo at the top of this page, that rides on top of the flow of water. It smoothes the water flow and forces any small gold that may be riding on top of the water back into the main flow. The classifier screen also acts to slow the flow of water and create a partial separation of the large rocks from the smaller gold bearing material, which passes through the screen and directly into the first couple riffles. The screen may be a punch plate or a heavy wire mesh with holes varying from 1/4" to 1" in size.

The main gold capturing section of the sluice box has riffles over a carpet. The riffles create gold traps which direct the gold into the carpet which captures and holds the gold. Many types of riffle designs exist, the most common being an inverted "L" design referred to as "hungarian riffles". Expanded metal screening of various types are also used in many sluice boxes as a riffle or in conjunction with other riffle types. Carpets employed included black ribbed rubber matting, riffled indoor/outdoor carpeting, and a type of carpeting referred to as "miners moss". Miners moss is a nickname for a type of commonly used in building entryways that looks like pressed spaghetti. The original design is 3M Nomad® but third party alternatives have recently become available. The open weave design that makes it good for trapping dirt from the bottom of shoes also makes it an excellent gold trapping carpet. 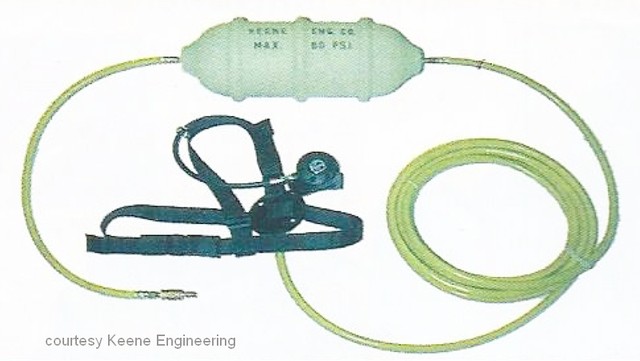 An optional component on most suction dredges is an air compressor which is operated off the same motor as the pump via a belt and pulley arrangement. The air compressor is a special breathing air compressor than can deliver air to a diver underwater for as long as the motor is running. The air is delivered to the diver with an airline, reserve tank, and regulator. Surface air supply dive systems are commonly referred to as hookah diving systems.

Dredges are normally sold as complete units but most component parts can be obtained separately as replacement parts or to build a custom dredge out of parts.