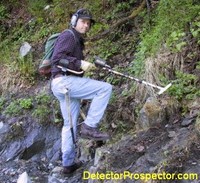 The Gold Prospectors Association of America has a new set of mining claims on one of the best mining sites on the Kenai Peninsula south of Anchorage. The claims are only accessible to GPAA members, but access to this ground alone is well worth the cost of membership. The membership kits contain a guide to GPAA claims nationwide, a gold pan, panning video, snuffer bottle, and more. The membership also includes a one year subscription to the GPAA's excellent magazine. The claims are relatively new, and so I decided to drive down and check them out. IMPORTANT NOTE - THESE CLAIMS ARE NO LONGER AVAILABLE TO GPAA MEMBERS.

I loaded up my nugget detector and headed out of town. The drive south is very scenic, and wildlife is usually seen along the way. One location just south of Anchorage, along Turnagain Arm, is a good spot to see Dall Sheep. The sheep come down in the spring and feed on the slopes just above the highway. They will often come down right beside the road, much to the delight of tourists and locals like myself. It was at this location that I took this picture of a Dall Sheep walking along the shoulder of the road. 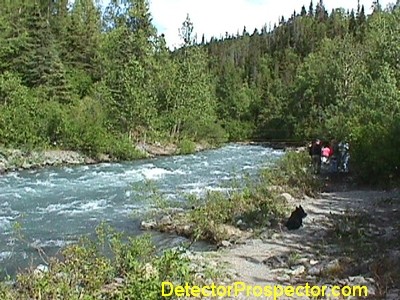 The GPAA claims are on the same location as the old workings of the Polly Mining Company, one of the most productive old mines in the area. The creek has extensive deposits of gold along the banks above the creek, and most of the gold was mined by washing these bank deposits. There was a pretty good group of GPAA members and visitors there when I arrived, as a general outing and picnic had been planned for the weekend. After chatting awhile, I grabbed my detector and proceeded to explore the area.

Most of the people were working the bedrock exposures along the right bank of Mills Creek above the point where it joins Canyon Creek. Many small gullies cut the bank, and old bench workings are evident in abundance. Some gold has been found with detectors on the bedrock, but most people are using highbankers and sluices at this location. Some dredging is also taking place along the creek, with decent results. Nuggets up to several pennyweight have been found in the area. The only problem is that getting to site requires crossing Canyon Creek. The road crosses the creek, but the water depth requires your vehicle to have good clearance. My Chevy S10 was fine, but you would not want to cross with a vehicle that has any lower clearance. Many people park and cross in waders. The stream flow is fairly slow at this point, so crossing in hip boots or chest waders presents no problem. 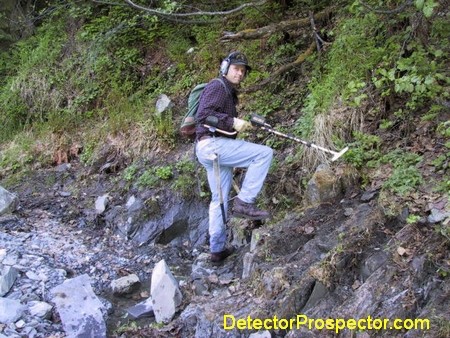 I worked one of the gullies for a while, removing rocks and brush to uncover bedrock, but only found one small nugget. I headed up the creek, checking the exposed bedrock with my detector, and found a couple more nuggets. I was not having much luck, but finally found a bedrock exposure on the trail, where people were literally walking over the gold. I worked at removing the rocks and small amount of overburden from the site, finding small nuggets periodically as I checked the bedrock with the detector. 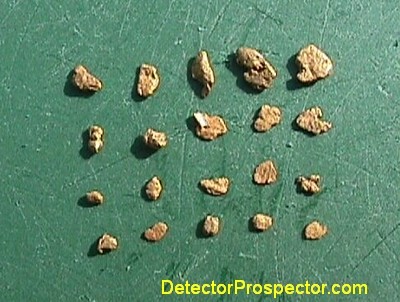 The day was wearing on, and I decided to head back to town. My vial ended up containing twenty small nuggets, weighing a total of just over a pennyweight (1/20th of an ounce). I highly recommend this area, particularly for those wishing to enjoy the camaraderie of the members of the GPAA. They are simply a terrific group of people, friendly, and always willing to share what they know about mining with new members. This is a great way for someone new to mining to learn what it is all about.