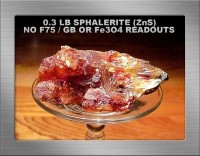 From the earliest time when we were aware of our surroundings, most of us looked for pretty rocks. We wondered what interesting or valuable minerals might possibly comprise them. Now as adult hobbyists, I doubt if any of us hasn’t benchtested an interesting rock from curiosity, and wondered what actually produced the signal.

Although a sensitive benchtest usually has little in common with how marginally conductive rocks and minerals respond to metal detectors in the field due to ground effects, we can learn and become familiar with how rocks and minerals in our respective areas respond to metal detectors in a benchtest. A sensitive metal detector’s electromagnetic field penetrates rocks, usually generating either a positive or a negative signal in response to whatever material is in the rock. We can sometimes determine whether such signals should be investigated further, or whether worthless iron minerals produced them.

I’d generally describe my benchtest results as worthwhile and informative, but that notwithstanding, I look forward to doing a benchtest because I think it is an intriguing study on its own merit. That said, how do you conduct a benchtest? I’ll describe my methods and hopefully we’ll see what you think about it. 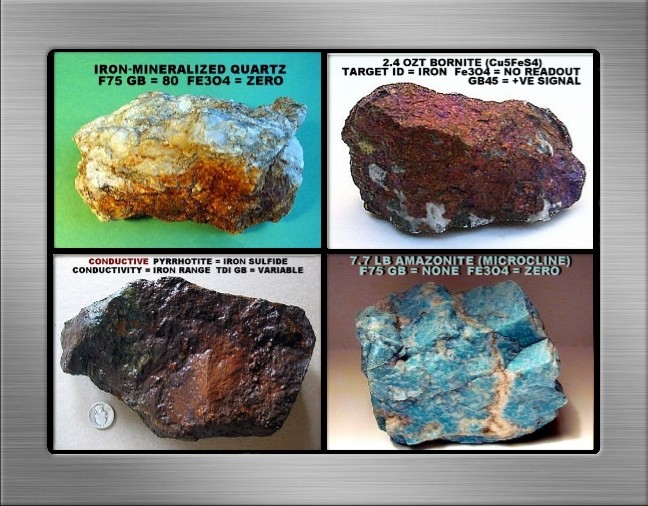 I prefer a small (concentric) coil to promote detector stability and improve sensitivity to the rock sample, to ensure uniform sample exposure to the coil, and to minimize EMI (electromagnetic interference) especially if benchtesting at home. Elevate the sensitivity control as high as possible while maintaining reasonable detector stability such that you can clearly hear changes to the threshold.

To check for a target ID, move the sample back and forth across the coil at a distance that produces the best signal but does not overload the coil. To determine ground balance and Fe3O4 readouts, advance the sample toward the coil, back and forth to within an inch or two (depending on sample size and signal strength) of the coil’s electrical sweetspot. Ensure your hand does not come within detection range of the coil to avoid creating false signals. If you extend your fingers to hold the sample, this is not an issue when testing larger samples. If necessary use a plastic or wood food holder that can firmly grasp small samples. 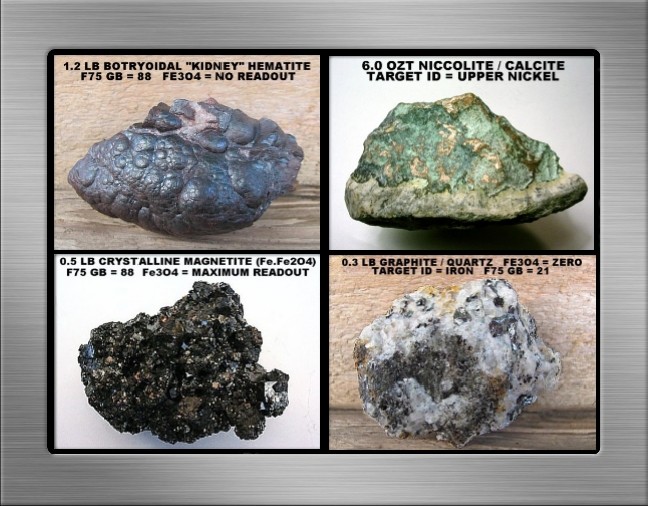 Benchtests should be conducted utilizing a minimum of two widely diverse GB control adjustments. Initially I prefer the same GB control adjustment that is typically required to keep my detector ground-balanced to the substrates in my prospecting areas. It’s a personal preference that works for me. That particular GB control point (F75 / GB86) is more likely to improve any rock or mineral sample’s signal strength compared to using a more reduced (more conductive) GB compensation point.

The next step is to use a dramatically reduced GB control adjustment (F75 / GB45) as suggested by Fisher Research Engineering. This setting ensures that (obviously weathered) oxidized samples do not generate a positive signal from any type of non-conductive iron mineral inclusions, particularly maghemite mineralization that may be present within such rocks. It follows that this second benchtest will, if anything, slightly subtract from the sample signal strength, particularly with low grade and otherwise marginally conductive samples, compared to the first step of the benchtest at GB86.

As a general rule, I do not recommend the F75 / GB45 compensation point for benchtesting (non-oxidized) mafic samples that are dominated by constituents such as common magnetite or other black minerals that normally support highly (non-conductive) elevated GB readouts. Such samples can produce strong negative threshold responses at the reduced GB compensation point. It will be difficult or impossible for the signal from a marginally conductive substance to successfully compete with those negative threshold signals. For non-oxidized samples Fisher Research Engineering suggests using F75 / GB65 rather than the F75 / GB45 compensation point, since obvious iron mineral oxidation should visually be absent from such samples.

With the above discussion in mind, extremely fine-grained, unweathered magnetite that occurs in pyroclastic material (for example volcanic ash) can drop into the GB45 range, but it is extremely rare. Unweathered volcanics do frequently drop into the GB70's due to submicron magnetite, but the recommended F75 / GB65 compensation point will eliminate those positive signals. 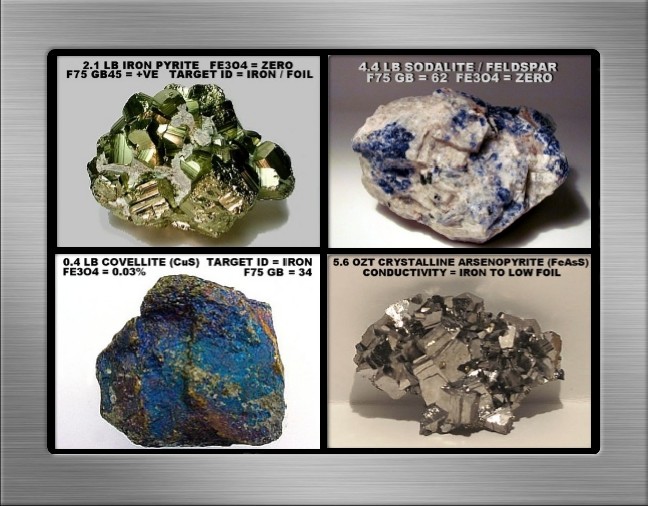 The arsenopyrite sample depicted above is a good example of a commonplace mineral that we encounter in the silverfields of northeastern Ontario. Generally field examples could be described as marginally conductive and many are low-grade. A good many react with only a mild positive signal, and sometimes not at all to a benchtest depending on which GB compensation point is used.

The high-grade, solidly structured sample above produces a strong positive signal in either zero discrimination or true motion all-metal mode with the ground balance control adjusted to the GB compensation point required for our moderately high mineralized soils. As noted, that’s approximately F75 / GB86, although in the field, of course, it varies somewhat depending on location and coil type / size employed.

The response is not as strong as a similar size and shape metalliferous sample would produce, but it does generate a surprisingly strong benchtest signal that would be readily detectable in the field. Even with the GB control dramatically reduced to more conductive values (F75 / GB45), to ensure that any positive signals produced by non-conductive iron mineral inclusions should now only produce a negative threshold signal, it is no surprise that this (non-oxidized) specimen continues to generate a strong signal. 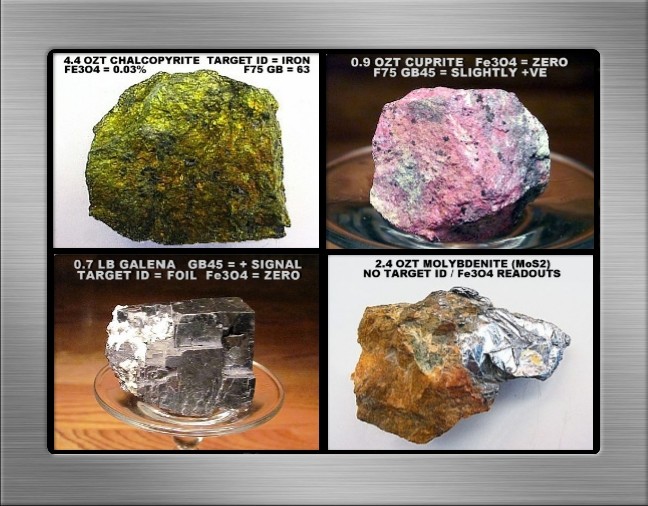 For those readers unfamiliar with detector responses to such minerals, the same general response scenario described above with arsenopyrite applies to other marginally conductive minerals such as galena, pyrrhotite and to a lesser extent even iron pyrites. Ordinary iron pyrites is generally innocuous, but maghemitized pyrite, pyrrhotite, and the copper sulfide ores, particularly bornite and chalcocite, can be a real nuisance in the field due to magnetic susceptibility, magnetic viscosity, and / or electrical conductivity, just depending on what minerals are involved.

Such variable responses from arsenopyrite and many other mineral and metalliferous examples clearly infer that signal strength and potential target ID depends on a sample’s physical and chemical characteristics, including the quantity of material within a given rock. These factors include structure, size, shape, purity (overall grade), and magnetic susceptible strength of iron mineral inclusions. Moreover, the VLF detector’s sensitivity, the GB compensation points employed, the coil type and size, and the sample profile presented to the coil further influence benchtest target signal strength and / or potential target ID readouts.

Incidentally, neither of my PI units will respond to the arsenopyrite sample depicted above, even with a TDI Pro equipped with a small round 5” mono coil, the GB control turned off, and a 10 usec pulse delay to deliver its most sensitive detection capability. That result is typical of most, but certainly not all sulfides and arsenides that occur in my areas. Higher grade and solidly structured pyrrhotite, an unwelcome nuisance iron sulfide, and collectible niccolite, a nickel arsenide, are commonplace mineral occurrences here that do respond strongly to PI units, although their respective VLF target ID ranges are quite different.

As a related but slight diversion, the photo below depicts a handsome example of the widely occurring mineral sphalerite. It forms in both sedimentary beds, and in low temperature ore veins. It is interesting to collectors because it possesses a dodecahedral cleavage which means that it breaks smoothly in twelve directions, and it is usually triboluminescent, meaning that it gives off a flash of light when struck sharply. Like many desirable minerals lurking in prospecting country, unfortunately sphalerite doesn’t react to metal detectors. 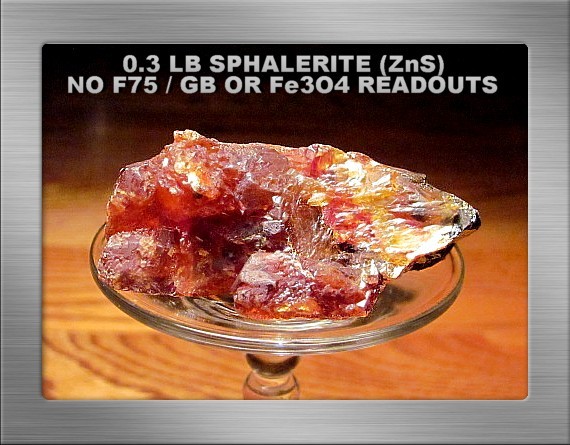 The foregoing is intended to illustrate that sensitive metal detectors can be utilized as a supplementary tool to assist with evaluating rocks and minerals. There is no question that the benchtest has serious limitations, particularly if trying to distinguish positive signals produced by some types of iron mineral inclusions from weak conductive signals.

That notwithstanding, a positive signal that persists below the F75 / GB45 compensation point cannot be confused with iron mineral negative threshold signals produced at that same compensation point. Therefore a positive signal merits further investigation. Such signals are almost certain to be generated by a marginally conductive mineral or a metalliferous substance.

On the more interpretive side of a benchtest, we need to point out that weak positive signals from lower-grade samples of minerals such as arsenopyrite, galena, pyrrhotite, chalcopyrite, and doubtless a few others, may disappear well before the GB control is reduced to the F75 / GB45 compensation point. We learn early that benchtests are frequently equivocal and require interpretation based on any further evidence that might support the benchtest result. Look for iron oxidation in addition to structural or other physical evidence as described above that could explain why a sample reacts as it does to a metal detector.

This article was promoted to an article from a forum thread. Additional information may be found there in follow up posts.