Where To Prospect For Gold Nuggets 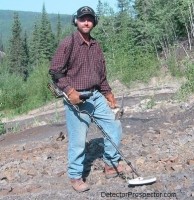 Here is a question I received via email, with personal references removed. I prefer to answer these on the forum so everyone gets the benefit of the answer plus others can offer their opinions also.

"I am new to metal detecting and, your site here has really helped me out. I have a couple questions that maybe you can help me out with. What are some of the geologic indicators that you look for to determining where to prospect for nuggets? I try to study some of the geology maps but I could use some further pinpointing. I have also been looking at the National map of Surficial Mineralogy. Using the aster and minsat7 maps what are some of the indicators that may point you to higher gold bearing ground? Any help would be deeply appreciated.

Could you point me to some old places where you have found gold? I'm not asking to be shown active patches. Just areas that you feel are worked out. I just want to see what gold bearing ground looks like. This would help me to start to learn the commonalities and characteristics of gold bearing grounds.

Still looking for that first nugget! Thanks again for any info you can provide."

My method is much simpler than that. I basically look for gold where gold has been found before. Think of it like fishing. If you want to go catch salmon you have two options. You can go to where people have caught salmon before - pretty good odds here. Or you can go where nobody has ever caught a salmon before. Very poor odds!

So call it prospecting using history to determine where gold has been found before, and then getting as close as I can to those places. History and proximity. Finally, I may then employ geology to narrow that search in a given area if it turns out the gold is confined to certain rock types.

The first place I normally turn as a rough guide to any new location in the U.S. is:

Principal Gold Producing Districts Of The United States USGS Professional Paper 610 by A. H. Koschmann and M. H. Bergendahl - A description of the geology, mining history, and production of the major gold-mining districts in 21 states. This 1968 publication obviously lacks the latest production figures but it still is a great overview to where an individual prospector can look for gold in the United States. It is a 283 page pdf download so be patient. Pay particular attention to the listed references in the extensive bibliography for doing further research. 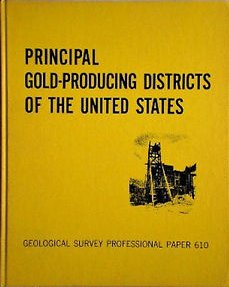 So just for fun let's say I want to go look for gold in New Mexico. The section on New Mexico starts on page 200 and here is a quick summary of the opening paragraphs:

"The gold-producing districts of New Mexico are distributed in a northeastward-trending mineral belt of variable width that extends diagonally across the State, from Hidalgo County in the southwest corner to Colfax County along the north-central border. From 1848 through 1965 New Mexico is credited with a gold production of about 2,267,000 ounces; however, several million dollars worth of placer gold was mined prior to 1848. Mining in New Mexico began long before discoveries were made in any of the other Western States (Lindgren and others, 1910, p. 17-19; Jones, 1904, p. 8-20). The copper deposits at Santa Rita were known and mined late in the 18th century, and placer gold mining began as early as 1828 in the Ortiz Mountains south of Santa Fe. In 1839 placer deposits were discovered farther south along the foot of the San Pedro Mountains. The earliest lode mining, except the work at Santa Rita, dates back to 1833 when a gold-quartz vein was worked in the Ortiz Mountains. In 1865 placers and, soon afterward, quartz lodes were found in the White Mountains in Lincoln County; in 1866 placer deposits were discovered at Elizabethtown in Colfax County, and silver-lead deposits were discovered in the Magdalena Range in Socorro County. In 1877 placers and gold-quartz veins were found at Hillsboro, and in 1878 phenomenally rich silver ore was found at Lake Valley in Sierra County.

The mineral belt of New Mexico is in mountainous terrain that lies between the Colorado Plateau on the northwest and the Great Plains on the east. It is a zone of crustal disturbance in which the rocks were folded and faulted and intruded by stocks, dikes, and laccoliths of monzonitic rocks. Deposits of copper, lead, zinc, gold, and silver occur locally throughout this belt. Some deposits of copper and gold are Precambrian in age, but most of the ore deposits are associated with Upper Cretaceous or Tertiary intrusive rocks. The gold placers were probably derived from the weathering of these deposits. In later Tertiary time lavas spread out over wide areas of the State, and fissures within these rocks were later mineralized. These fissure veins are rich in gold and silver, but in most places they are relatively poor in base metals. In New Mexico, 17 districts in 13 counties yielded more than 10,000 ounces of gold each through 1957 (fig.19).

Figure 19 is a handy map showing us where you want to look in New Mexico and also where looking is probably a waste of time. Click for larger version. 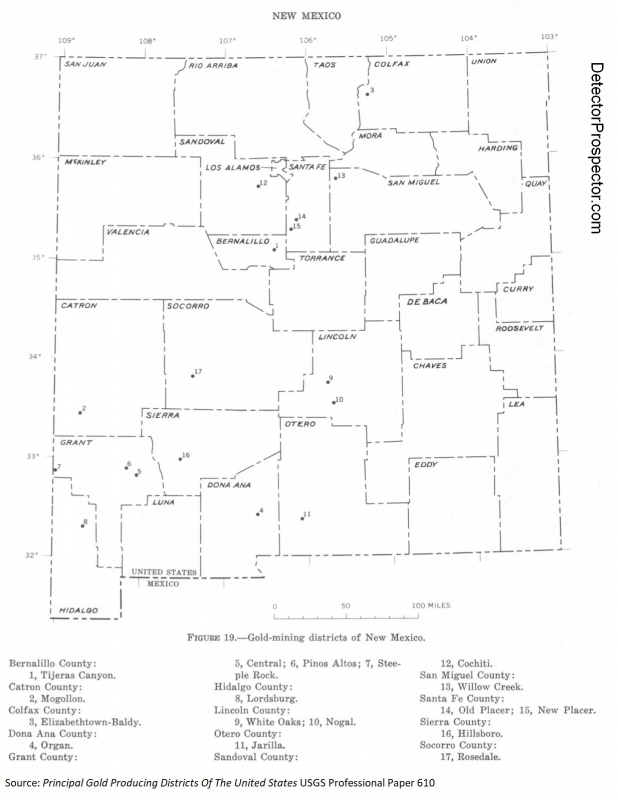 The map shows what the text said "The mineral belt of New Mexico is in mountainous terrain that lies between the Colorado Plateau on the northwest and the Great Plains on the east." Sticking to this area is going to be your best bet. Based just on this map I see two areas of general interest - the central northern area, and the southwestern corner of the state.

The text mentions that placer deposits were discovered at Elizabethtown in Colfax County, and the map shows that as the Elizabethtown-Baldy mining district. Following along in the text we find this:

"The placer deposits along Grouse and Humbug Gulches, tributaries of Moreno Creek, each yielded more than $1 million in placer gold and silver. Another $2 million worth of placer gold and silver was recovered from the valleys of Moreno and Willow Creeks (Anderson, 1957, p. 38-39), and some gold also came from the gravels along Ute Creek. Graton (in Lindgren and others, 1910, p. 93) estimated the placer production of the Elizabethtown-Baldy district prior to 1904 at $2.5 million, and C. W. Henderson (in U. S. Bureau of Mines, 1929, pt. 1, p. 7 40) estimated the production through 1929 at about $3 million (145,138 ounces). The total placer production through 1959 was about 146,980 ounces."

The reference material from the passage above is in the back of the book and is where we can get real details. Google is our friend. This stuff used to take me lots of visits to libraries!

That is more than enough, but let's also Google placer gold new mexico

Lots of great links there, but two jump out:

Notice the source of the last one. Most states with much mining have a state agency involved that can be a good source of information and in this case it is the New Mexico Bureau of Mines and Mineral Resources.

That last one is a real gem and contains this passage:

"All known placer deposits in New Mexico occur in late Tertiary to Recent rocks and occur as alluvial-fan deposits, bench or terrace gravel deposits, river bars, stream deposits (alluvial deposits), or as residual placers formed directly on top of lode deposits typically derived from Proterozoic, Cretaceous, and Tertiary source rocks (eluvial deposits). During fluvial events, large volumes of sediment containing free gold and other particles are transported and deposited in relatively poorly sorted alluvial and stream deposits. The gold is concentrated by gravity in incised stream valleys and alluvial fans in deeply weathered highlands. Most placer gold deposits in New Mexico are found in streams or arroyos that drain gold-bearing lode deposits, typically as quartz veins. The lode deposits range in age from Proterozoic to Laramide to mid-Tertiary (Oligocene-Miocene) (Table 2). There are some alluvial deposits distal from any obvious source terrains (Table 2). Eluvial deposits are common in many districts; some of the larger deposits are in the Jicarilla district."

So now we have a lifetime of ideas on where to go and a basic idea of the geology. And an even better map! Click for larger version. 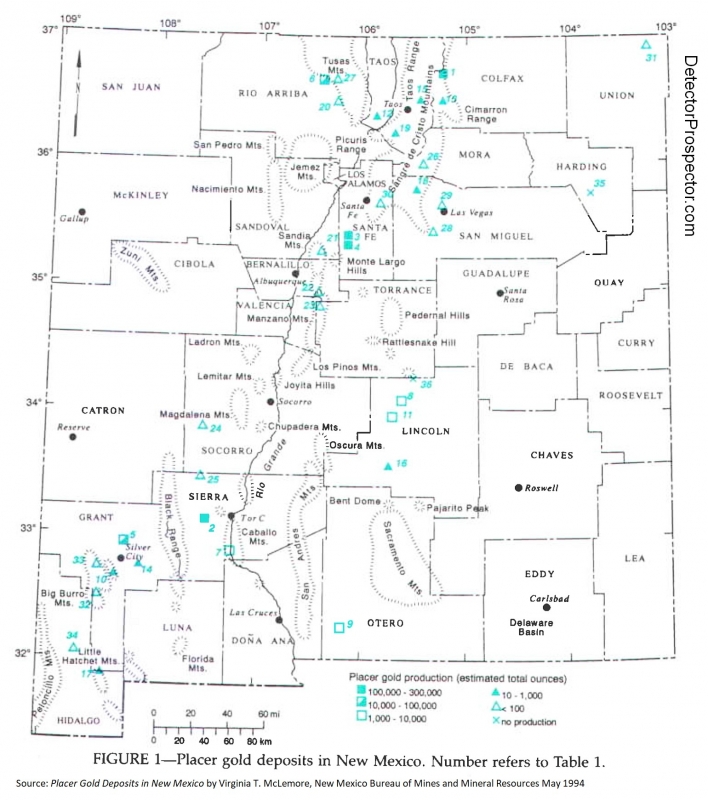 Here you will find basic site information, references, and a zoomable map with alternate satellite view.

6. Click on Browse All Deposits or Use The Interactive Map

From here you can dig into all kinds of specific site information but the navigation is a real mess. Have fun!

Historic claim staking activity can be a clue. You can get the Big Picture by looking at Mine Claim Activity on Federal Lands for the period 1976 through 2010

OK, that really should have answered your question. As far as places I have been, they are nearly all in Alaska and can be found here

Now, I did all the above from scratch with no real prior information on New Mexico in about 2 hours. You can do the same for any state. However, finding where the gold is really is the easy part. The hardest part by far is finding out who controls the land and getting proper permission for access. In Alaska everything is covered by thick ground cover, so opportunities for metal detecting are strictly at creek level, and nearly always claimed. The process there is simple - find out who owns the claims and get permission for access. In most of the western U.S. there is far less or no ground cover, and so getting in the vicinity of and searching around or near mining claims without being on them is a far more viable option than in Alaska. Or you can try and get permission to access the properties. You still need to be able to track down property locations and owners however.

For private property I subscribe to and use OnXMaps for my PC, Google Earth, iPad, and iPhone. It quickly maps private property and gives you access to tax roll information about the owners.

Tracking down mining claims is easy in the big picture and harder in the details. The Diggings referenced before has interactive claims maps. I subscribe to Minecache for their Google Earth overlay. However, the most comprehensive source with the deepest repository of Land Ownership information is Land Matters. They have online claim mapping with direct links to claims owner information. Note that all online sources have a lag time between the actual staking of a claim on the ground and when it reaches the online systems, if ever. I say if ever because some claims exist solely at the county or state levels and there is no good way to find them short of visiting local recorder's offices or eyeballs on the ground.

Prior thread on finding claims information.

Finally, I am not the last word on this subject by any means. This is just how I go about it - I hope it helps somebody else.

This article was promoted from a thread on the forums. Additional details may be found there via follow up questions and posts.