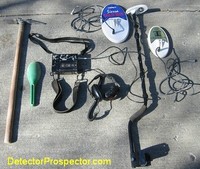 The snow has finally melted enough to let me try out my new White's Electronics Goldmaster GMT and several coils. The GMT is my newest nugget detector. I really like the GMT's fast automatic ground balance and advanced iron id capabilities. But most of all it has much better depth of detection on larger gold than my old Fisher Gold Bug 2, and so I'm hoping to eke some deeper nuggets out of some areas, especially some of those places that also have lots of iron trash.

I went to Crow Creek Mine near Anchorage, Alaska. A good local site, but hammered by detectors over the years. It's getting to where you have to dig to find nuggets with a detector rather then just scan the surface. Excavating slowly into an area and checking the material with the detector as you go pays off more often now.

I wanted to try several things. My first plan was to use the Sierra Gold Max coil to carefully scan areas that have been detected before, hoping to find a larger nugget down just a bit deeper than others may have detected. A real long-shot at Crow Creek, but I try it now and then. The reason I say it is a long-shot is that pennyweight plus nuggets are pretty rare at Crow Creek anyway, and betting someone missed them in the heavily searched areas is a poor bet indeed. But you never know unless you try.

There was still a lot of snow at the mine, so I spent the first half of the day with the big coil hitting south facing slopes. The going was as steep as I could handle, and my chest mount setup was welcome. It was steep enough I would find decent footing, then scan in all directions as far as I could reach. Keeping the weight off my arm was a big plus. But a half day of this mountain goat detecting revealed not a single nugget. 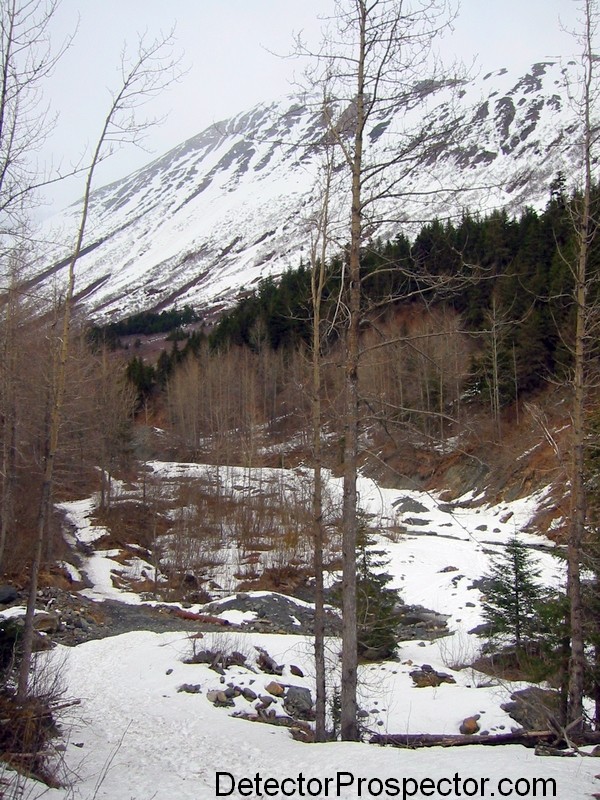 My arm got tired, and so I put the stock DD coil back on and headed for a little flatter ground. There are lots of brushy areas at Crow Creek that are relatively open right after the snow melts off, but which will be jungle-thick after the new brush grows up in a few weeks. I worked in among the alders hoping for a nugget. The whole area was stripped with hydraulic giants, but the brush has dropped a couple inches decomposed organic cover over the old tailings. Trying to detect through this couple inches of cover means little chance of hitting small gold, but again I was hoping for a larger nugget. But except for a few bullets and some foil, again no gold. There is still too much snow in the underbrush, however, so I'll try some more in a couple weeks.

The GMT worked extremely well with the large coils, and the automatic ground balance worked well at maintaining smooth performance, especially in the organic material and roots in the underbrush area. Extra large coils often have more problems with ground mineralization, and the automatic ground balance looks like the best way to go with the largest coils.

Here is a picture of my tools for the day. My GMT is modified for chest mount use, and so it looks a bit different than the unit most are used to. Since the GMT is not normally convertible to a chest mount I did the conversion myself - details here. I almost always use headphones. My favorite pick for rough terrain is the Hodan walking pick, as its extra long handle is great on hills and for crossing streams. I have a super magnet clamped on the digging head to suck nails out of the ground while I dig. And for finding those little nuggets quickly I always have a nugget scoop stuck in my back pocket. The spare coils go in my rucksack with the camera, bug dope, first aid kit, and snacks. I usually have at least one spare coil along when detecting. Don't forget those coil covers. 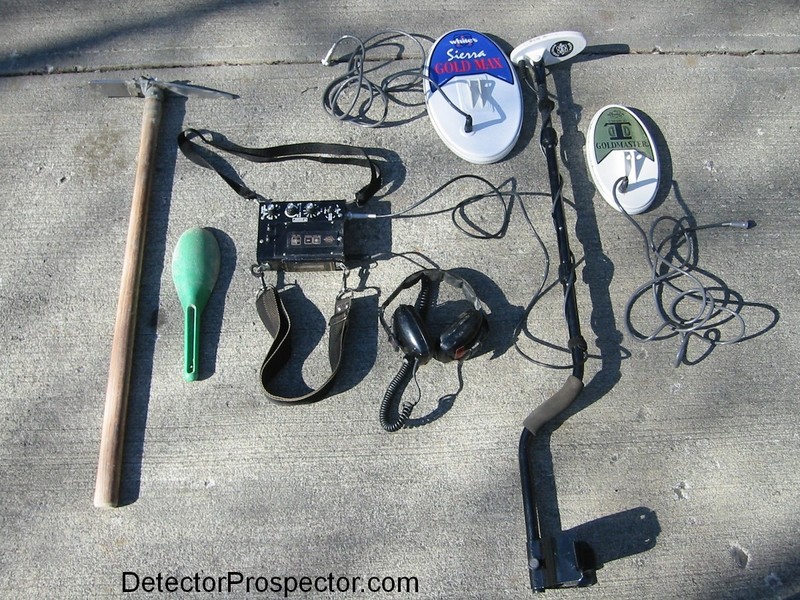 By now it was 3:30 PM and I still had no gold to show. My answer for this in the past has been to use my Gold Bug 2 with small coil and scrape into some pay layers. I saw some likely areas in all my prospecting throughout the day, and so I figured it was time to really give the little 6" prototype coil a workout. I've long wanted a small coil for the Goldmasters, and my getting my hands on this experimental small coil was instrumental in my purchasing the new detector.

The first couple spots I tried did not reveal any gold, but the third had a nice little clay layer, and after a few minutes I found my first nugget with my new GMT. In less than two hours I excavated 10 nuggets from the layer, the largest just under a pennyweight, and the smallest a half grain. The ground is very moderate at Crow Creek, and I had no problem running the gain maxed out. I ran the SAT at minimum, and audio boost on. The coil was smooth and quiet, in fact surprisingly so, considering how high I had the sensitivity set.

The big thing about the GMT is the auto ground balance. It works very well, but it really tunes out small nuggets fast when trying to pinpoint them. As long as I scanned it would hit the nuggets just fine on the first pass, but they would tend to fade when trying to zero in on them. I played with both manual balance and automatic quite a bit. It proved easier to just use manual while working a small area like I was, rather than switching back and forth. Switching is very easy, however. Just squeeze the trigger switch and the ground balance "locks" at it's current setting. It would all depend on the ground as to what might be the best method. 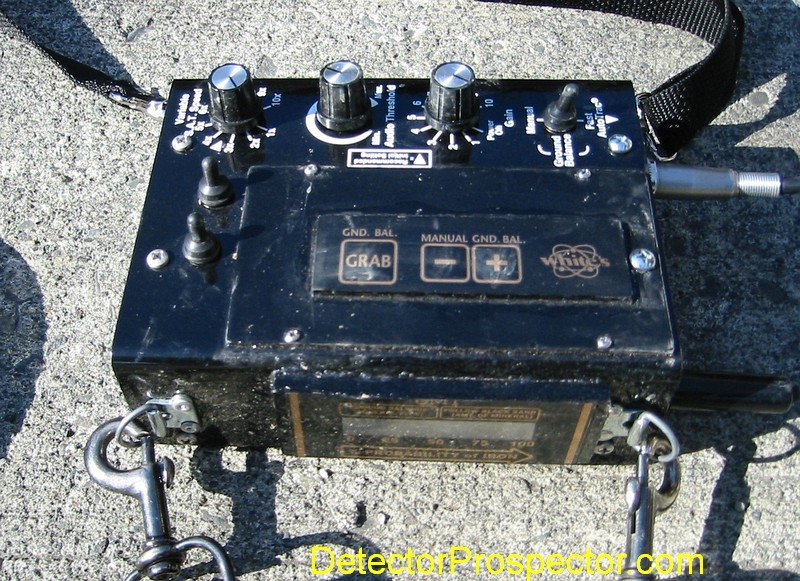 Close up of White's GMT converted to chest mount

I found earlier in the day that the automatic would tend to tune out hot rocks and iron targets to varying degrees. As long as the sweeps are wide and the system is getting an average ground reading it signals well on targets. Then when zeroing in on them they tend to fade in distinct ways depending on what the items are. I still need more time with the detector, but I felt like I could sense differences in the way hot rocks, iron trash, and gold responded with the automatic ground balance engaged. It is an extremely fast automatic ground balance, much faster than others I have used, and so it seems to have some interesting properties of its own. I'm looking forward to working with it more.

All in all I ended up feeling the automatic ground balance is well worth having on the GMT, and there are times when I would really like it, particularly when hunting larger gold with the large coils. But at the same time it is very nice to be able to run the GMT in manual balance mode if desired. In moderate ground manual tuning works just fine, and for the tiniest gold I think it is mandatory to be able to manually tweak the ground balance. This is especially handy if you want to run with a slightly positive balance, which is impossible to do with most automatic units. The bottom line is you get the best of both worlds with the GMT. Thanks, White's!

In any case, I found the small coil to be extremely effective, and very much on par with what I've learned to expect from my Gold Bug 2 with small coil. The most remarkable thing about the little coil was how stable it was. I rubbed it and knocked it with nary a false signal. I can see that this little coil is going to get a lot of use in the future, as it's ideal for the normal Crow Creek "dig and detect" method. I hope White's produces a coil like this for the Goldmasters, and am just thrilled that I have one to play with.

So here is the gold. The smallest nuggets are .5 grain, .9 grain, 1.6 grain, and two at 2.1 grains. The largest is 23.4 grains and the next 18.2 grains. Total weight 64 grains, or about 2.5 pennyweight. Not bad for my first outing with a new detector, and a good start to a new detecting season. And now that I've located some new areas to detect at Crow Creek I can't wait to get back and find some more gold!