The owner of the High Grade lode mine in Hatcher Pass stopped by the store. He was interested in buying a metal detector to aid in hardrock prospecting. I’ve done a bit of this before, and realize how hard it can be for a beginner to get results. I offered to meet him at the mine last Sunday to demonstrate what I could do on his mine dump. If he liked what he saw, great. If not, he would save the price of a detector, and I would still get a fun trip out of town.

I took my to the mine under gathering clouds. When chasing tiny gold enclosed in quartz a high frequency detector like the White's Goldmaster with a small coil is the way to go. The High Grade is up behind the Independence and Gold Cord mines at Hatcher Pass. The High Grade was named because it literally produced some very high-grade ore. The veins were narrow, however, and the mine only produced a limited amount of ore.

The dump had so much iron trash in it that I found it easier to simply pick up quartz samples and wave them over the detector search coil. The ore in Hatcher Pass is relatively clean quartz with free gold. The gold does tend to associate with pyrite, so any quartz with reddish staining or obvious sulphides is worth extra attention. The pyrite here is non-conductive, and so will be ignored by the detector. Many very rich samples, such as those pictured, have little or no pyrite; so all quartz should be detected. I have seen gold in perfectly pure, white quartz in the area.

In less than an hour I found eight pieces of quartz that gave obvious signals. Some had visible gold, while others were giving signals from gold totally enclosed within the quartz. Unfortunately, rain began to fall, and then it REALLY began to fall. I was not prepared for rain, but we had proven the point… the detector worked very well on the ore. I headed on home.

I left the ore with the owner. BLM is putting the squeeze on him, so I figure he needs all the samples he can get. The ore pictured below is from the Fern Mine, also in Hatcher Pass. I obtained it from a geologist that worked the mine years ago. It is shot through with gold, and is a good example of what might be found by a lucky prospector in the Hatcher Pass area. It exhibits black streaking that is often associated with the better ore in the area. 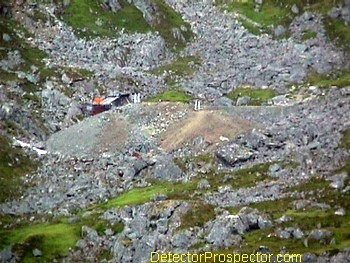 An excellent source of additional information is Hatcher Pass Gold by Ron Wendt. Ron tells about all the mines in the area, and includes many maps and photos. The book is out of print but can be found used. ee also the USGS report for the area - Geology and Ore Deposits of the Willow Creek Mining District, Alaska (1954).

Be aware that most of the hardrock mines in Hatcher Pass are patented properties. In other words, they are no longer just mining claims, but actually are private property. Few of the mines in the area are ''abandoned'' and permission should be sought from the mine owners to sample the mine dumps. Use extreme caution around the old mines, as many tunnels, shafts, and old structures present a hazard to the unwary.

How was the gold deposited at Hatcher Pass? What follows is a simplified view of gold deposition. In reality is this is all theory, and entire books are devoted to the many theories of how gold deposits form. So what I am presenting below is a layman's view of a commonly accepted theory... not a "fact". Still, the theory works well enough to be used to predict where gold occurs.

Gold most commonly occurs in quartz veins. The quartz and gold were deposited within crevices and fractures in rock far below the earth by circulating hot water. You will see the term "hydrothermal" a lot. hydro = water + thermal = hot. Most gold was formed by hydrothermal processes. Note that most quartz veins do not contain gold, so quartz alone means little.

So we need two things... rock with crevices and fractures, and a source of hot, mineral laden water. The classic gold deposit is the hardrock mine area at Hatcher Pass north of Anchorage. A large mass of molten rock, in this case granite, rose towards the surface from far below. This kind of activity tends to result in a pattern of fractures or faults in the surrounding rock as this molten mass forces it's way upward.

When this mass of molten rock cools, it shrinks, and more fractures form within this rock as it cools. What finally results is a "granitic intrusive", another term you will see often when reading about gold deposits. The hardrock deposits at Hatcher Pass are a were formed around a granitic intrusive.

As the molten rock cools, water seeping down from the surface reaches the zone of newly introduced minerals and heat. Water that is extremely hot and under pressure can dissolve many minerals that we think of as insoluble, especially when some of the dissolved minerals cause the solution to become even more corrosive.

The water, now mineral-laden and hot, rises back towards the surface. As it circulates through the crevices and faults in the rock it deposits many of these minerals. Much of the mineralization is simply because the solution is cooling, and so can no longer keep the minerals in solution. Often, in the case of rich mineral deposits, the solution comes into contact with another type of mineral that causes a chemical reaction. The classic mineral in this case is limestone. Many of these solutions are acidic, and when they come into contact with limestone, the acidity is neutralized, and the mineral drop out of solution. Many very rich mineral deposits have been found where limestone comes into contact with other rock types. 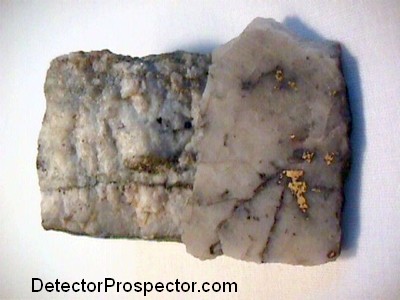 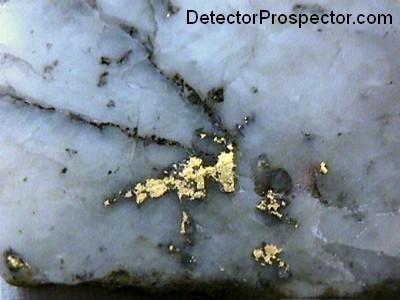 In the case of Hatcher Pass, the deposit follows the classic example. There was a rounded mass of granite far underground. Fractures formed in the top of the granite, and in the other rocks immediately above and around the granite. Hot water solutions deposited quartz and gold in these fractures. Ages of erosion exposed the top of the granite and the fractures to the surface. Erosion released the gold from the veins and deposited some of it in the streams and rivers in the valley. The rest remained in the hardrock veins, to later be discovered and mined.

Very common in this scenario also, is the concept that the gold veins have a limited depth. The gold veins tend to occur just above and within the upper layer of the granitic mass. As erosion (or mining) extends downwards below a certain level, the gold deposits tend to thin out and disappear. A situation arises where areas that have extensive gold in the streams often have little in the rock (it all eroded out) and areas where the stream deposits are poor will often be associated with very rich hardrock mines (most of the gold is still in the rock). Again, a generality.

Granitic intrusives are common along major fault lines. Maps can readily be had of faults and their related intrusives, and it is no surprise these tend to coincide with many of the major gold regions of the world.

Volcanoes are another process where by molten rock rises to the surface, surrounding rocks are fractured, and circulating waters deposits minerals, including gold, in these fractures. The oldest hardrock mine in Alaska is the Apollo Mine on Shumagin Island in the Aleutians, near Sand Point. This and other gold deposits in the Aleutians and the Alaska Range are volcanic in origin. The Aleutians are a "volcanic chain", a long string of islands that are actually volcanoes.

There are many other types of gold deposits, and many variations on these types. The best reference I have seen on the subject is "The Geochemistry of Gold and its Deposits" by R. W. Boyle, (1979) Geological Survey of Canada, Bulletin 280, 584 pages.