I am fortunate to have been involved in the testing of the new Minelab Gold Monster 1000 prior to its release. One benefit is that I have seen the questions that others have posed about the detector, and now I can answer a few of them.

When I use new detectors I always have a goal in mind. I am not trying to pick the detector apart for what it cannot do. Instead, I believe most well designed detectors have something they excel at. My goal is to determine how to use a new detector for maximum benefit. The best way to make that happen is to use the detector in the way it was intended to be used, instead of trying to force it to be something it is not. The key is to be realistic. The Gold Monster 1000 is sold as an entry level single frequency metal detector. Expecting it to outperform detectors costing many times its price is unrealistic.

Engineers face a very important choice when designing a single frequency metal detector, especially as regards gold prospecting. What frequency should the detector run at? That choice determines nearly everything else about the detector. In general, low frequencies below 20 kHz handle mineralized ground better, and offer good performance on larger gold nuggets. Higher frequencies over 20 kHz enhance the sensitivity to small gold nuggets, but unfortunately ground handling suffers.

The number one question I see asked on the internet is how the Gold Monster stacks up as compared to this detector or that detector. Minelab has actually tried to answer that question directly via the following illustration:

The majority of the single frequency nugget detectors on the market today operate at or near 18 kHz. These detectors handle ground relatively well for non-PI detectors, and have good sensitivity on gram size and larger gold nuggets. They can detector smaller gold, but the smallest gold is not where they excel and the chart attempts to illustrate that. Other single frequency detectors running as high as 71 kHz have superb sensitivity to the smallest gold nuggets, but tend to suffer when it comes to depth on larger gold in highly mineralized ground. Again, the chart attempts to illustrate this fact.

The Minelab Gold Monster 1000 engineers decided to concentrate on a frequency that offered the best attributes of the lower and higher frequency extremes. The goal was to design a machine that would attempt to acquire in a single pass the bulk of the gold that machines operating at either extreme could recover if operated together – and yet do it with just one detector operating as efficiently as possible.

The catch is that the Gold Monster is still a single frequency detector and it cannot possibly capture 100% of the gold that two detectors operating separately at two vastly different frequencies can capture. If you study the illustration carefully, you will see there is still some gold the 18 kHz detector will do better on, and some gold the 71 kHz detector will do better on. Minelab is not claiming to be able to outperform every other detector under all other circumstances. The goal here is to capture as much of the obtainable gold as is possible with a single detector operating in the most efficient manner possible. 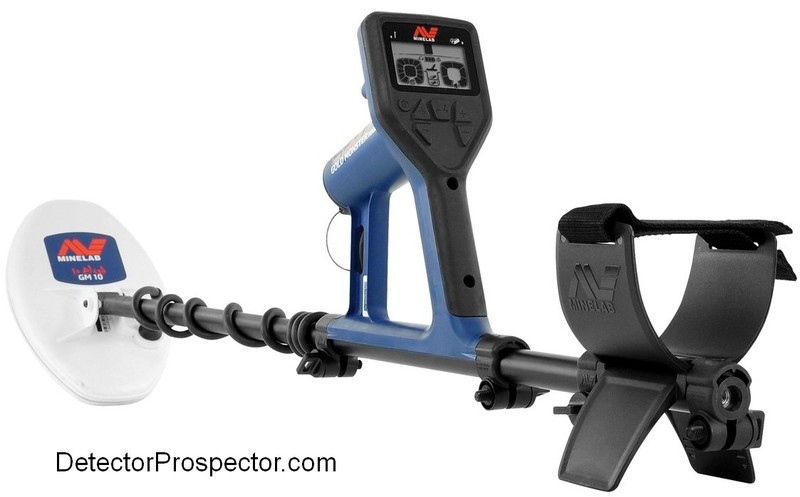 I have mentioned efficiency because there is more that goes into designing a gold prospecting detector than just the operating frequency. This is where Minelab is attempting to not only make a wise choice in the operating frequency, but to extend the efficiency of that frequency by optimizing the other parameters. First, electrical interference is detected and automatically rejected as much as possible when the detector is first turned on. This helps alleviate interference that could result in less than optimum performance.

A great deal of effort has been made into designing a sensitivity control that offers the ability not only to manually tune the detector but to deliver excellent results automatically. The automatic operation is important in ground that varies dramatically from place to place in such a fashion that it becomes difficult – inefficient – to constantly be readjusting the machine manually to retain the best overall performance level. Novices in particular tend to set and forget the sensitivity, leading to a situation where the detector could be running better if the control were optimized more often.

The crowning glory of the Minelab Gold Monster 1000 however is the automatic ground tracking system. The 45 kHz frequency is considered to be a high operating frequency, and as such it is subject to possible issues from highly mineralized ground and hot rocks. Manual tuning detectors can have great difficulty dealing with these problems… here is that word again… efficiently. The operator must be on top of and constantly adjusting the machine manually. It is very easy for the operator to be out of sync with the ground conditions and operating at less than optimum performance. At high frequencies having the proper ground balance is extremely critical. 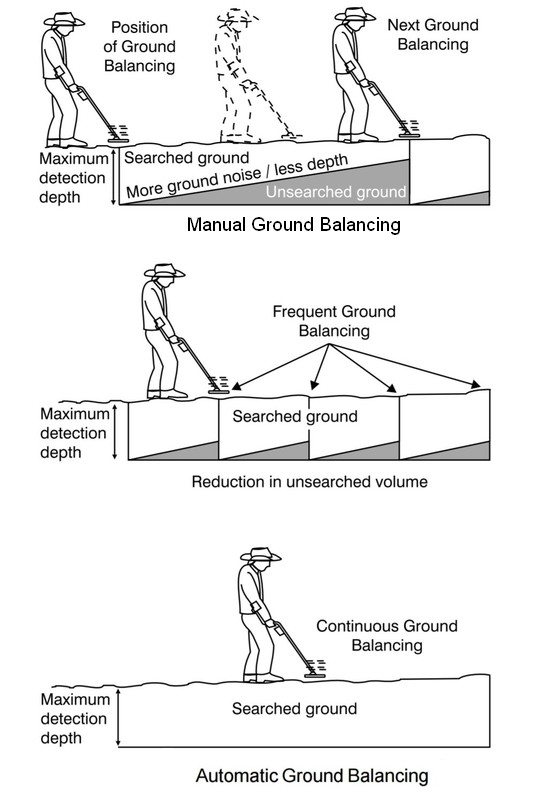 I will admit I have always tended to distrust automatic ground tracking systems. The theory is they can track out good signals resulting in missed targets. The reality however is the risks entailed by not being properly ground balanced are even greater, especially for novices. The illustration below attempts to show what happens when the operator of a manually tuned detector falls out of sync with changing ground conditions, and then “catches up’ by retuning the machine. The automatic tracking or continuous ground balancing detector however maintains optimum conditions at all times.

Even given this evidence in the past however I was a skeptic, and always preferred to manually adjust my detector ground balance controls. That is until I obtained first a Minelab SDC 2300 and then a GPZ 7000 detector. The SDC forced me to use automatic ground balance by offering no other option. A surprising thing happened – I liked it! It worked and it worked extremely well, so much so that when I got my GPZ 7000 it also remains in automatic ground balance mode.

The fact is that Minelab has always been a leading developer of automatic ground balancing systems, and I do not think it is being unreasonable to state that they may have the very best ground tracking systems available. The company really has had no choice being based in Australia and developing machines for ground conditions considered to be among the worst in the world.

Can the Minelab Gold Monster 1000 go up against the hottest high frequency detectors made and hold its own? Yes. I have personally used the Gold Monster with its 5” coil to easily find nuggets (flakes?) weighing under a grain. Not grams, grains - there are 480 grains per Troy ounce. Remember however that even Minelab in that first chart is telling you that a machine tuned specifically at a much higher frequency will have an edge on at least some tiny gold nuggets. 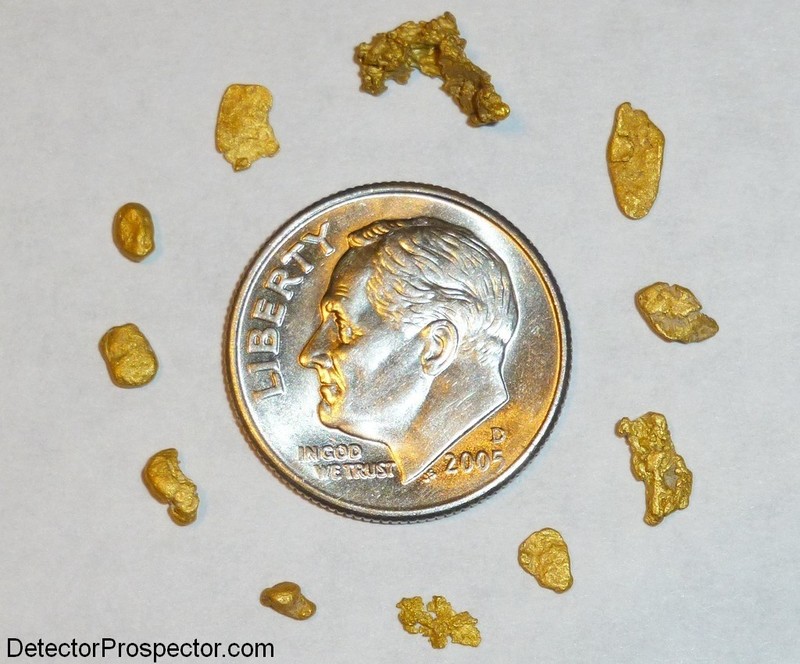 The difference and the serious advantage I believe with the Gold Monster 1000 is in the combination of the superior Minelab ground tracking system and the automatic sensitivity system, designed specifically for the GM1000. In all but the mildest ground operators will find that the Gold Monster is a much more efficient detector that allows more ground to be covered while keeping the machine tuned for the best performance possible. My advice to the old pros that get their hands on the GM1000 is that rather than try and force the machine into operating like your favorite manually tuned machine, seek out instead conditions where that machine struggles. Then trust in the Minelab automatic ground balancing system to compensate for and deliver superior performance under those conditions. Use manual more for targeting specific small areas.

Case in point, I took the Gold Monster to a location where hot rocks had given my GPZ 7000 some difficulty. Much to my surprise the Monster was able to automatically compensate for and allow me to operate in those hot rocks and find a couple tiny nuggets too small for the GPZ 7000 to find. The machine was far smoother and I was able to cover ground far more efficiently with automatic ground balance. I followed this up with a visit to a location with wet alkali ground where a high frequency machine would normally fail. I struggled with manual sensitivity for a bit, then threw in the towel and went to the highest Auto+ sensitivity setting. The machine quieted right down and I found a nice little nugget shortly thereafter. 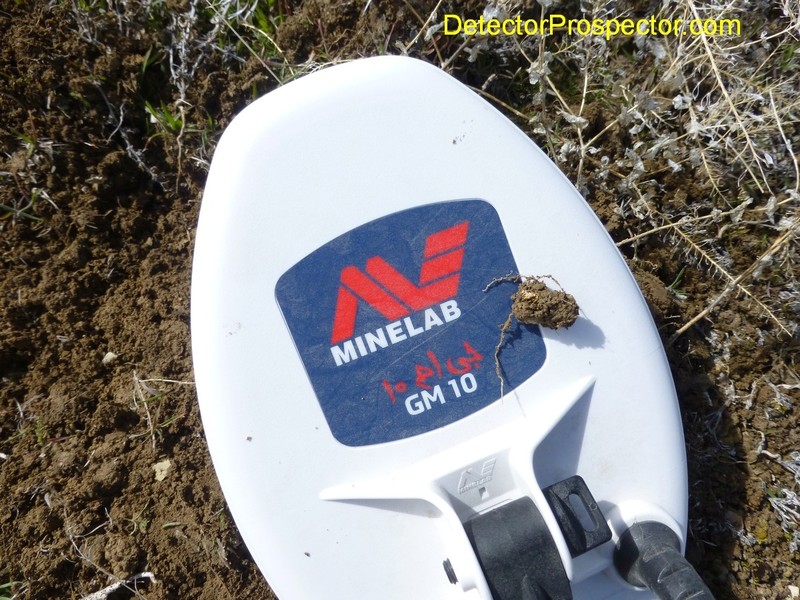 Nugget embedded in lump of dirt

If the ground allows you can certainly use manual ground balancing to get that hot edge on tiny gold nuggets. The Gold Monster 1000 lacks a standard threshold, but it is easy to set up a pseudo threshold by advancing the sensitivity to where the machine produces some light feedback from the ground. Those who like a threshold can run it this way – others may wish to back down just one notch for silent operation.

Old timers like me rebel at the thought of running without a threshold but with the GM1000 it works. The normal reason for running a threshold is to be sure the detector does not fall out of proper ground balance. Here however you can put a superb automatic ground balance to work for you, eliminating that concern. For the very worst conditions, the automatic sensitivity system can augment the automatic ground tracking to allow for efficient ground coverage under conditions that will bring other detectors in this class to a crawl, if not a complete stop. Frankly, if you can’t get the Gold Monster to handle the ground, it is time for a Minelab PI detector or a GPZ 7000.

To sum up, I do not want to leave you with the impression that the Gold Monster is the be all and end all of single frequency nugget detectors, and that it will under all circumstances get better performance on every single gold nugget than other single frequency detectors. That is not possible given the limitations imposed by having to choose a single operating frequency. I do believe however that the engineers at Minelab have come as close to this as is possible. The real secret to getting good results with the Minelab Gold Monster 1000 versus the competition will be in leveraging its superb ground handling capability to get the best overall gold nugget performance possible from a single frequency detector.

Understanding The Sensitivity Control On The Gold Monster 1000