*Notes on specifications: This page is a footnote link in all "Steve's Reviews" - metal detector and gold prospecting equipment reviews by Steve Herschbach.

Internet Price - Manufacturer's often publish manufacturer suggested retail prices (MSRP) intended to set the full value of an item. In the United States they also will often set a minimum advertised price (MAP) that determines the lowest price that can be used for advertising purposes. Note that this is not the lowest price an item can be sold for but instead is what you will normally see in print ads or online as the lowest advertised (sale) prices. The Internet Price in the chart is the normal advertised sale price as commonly found on the internet as of the date listed. Dealers will often try and sweeten the deal by including "free" items in the advertised prices. You can often negotiate a lower price by contacting the dealer requesting a lowest price for the item without all the "free" package items.

Technology - The basic operating technology a detector uses has a huge impact on how it behaves. Early consumer 1960's model detectors commonly employed a method referred to as Beat Frequency Oscillator (BFO). This simple design can be built by a school child with a handful of components. The search coil or loop was literally a coil or loop of wire. They are noted for making a distinctive "putt-putt-putt" continuous beat. The beat increases as a target is detected and the BFO responds to both conductive metals and magnetic minerals. The early 1970's saw the appearance of the Induction Balance (IB) detector. The IB detector employs two coils, a transmit and a receive coil, that are kept in electronic balance. They were therefore also commonly referred to as Transmitter/Receiver (TR) and that term saw more popular use. The TR produces a steady tone that increases in volume and the early TR models, like the BFO, responded to both conductive metals and magnetic minerals.

The BFO and TR were both very limited because their ability to detect magnetic minerals interfered with their ability to detect conductive metals. An IB or TR variant was developed that allowed the detectors to not only eliminate the signal from ground minerals but to discriminate between various metals. These detectors ran at lower frequencies than the TR models and referred to as Very Low Frequency (VLF) detectors. Dual mode models existed, the VLF/TR, but the TR modes were so limited they were eventually dropped in favor of pure VLF operating modes. Almost all such detectors are referred to as VLF detectors today, but VLF is actually a misnomer. In electronics, VLF refers to the 3 kHz - 30 kHz frequency spectrum. There are detectors operating at under 3 kHz, and so technically they are Voice Frequency (VF) detectors. There are also many models operating over 30 kHz which are technically Low Frequency (LF) detectors, although because they are operating at higher than VLF frequencies many people refer to the as "high frequency" detectors. Therefore on this website the more technically correct term Induction Balance (IB) will be used.

This is important because IB detectors are dramatically different than the other major technology employed at this time, the Pulse Induction, or PI detector. The IB detector requires two coils or loops that continuously transmit and receive in electronic balance. The PI detector requires only one coil but may use two. Rather than transmit and receive continuously, the PI detector transmits, pauses, then receives, which can be done with a single coil. The PI detector is able to ignore salt water and mineralized ground that an IB has difficulty with. This makes PI detectors particularly well suited for salt water diving applications, and that is where most consumer models have been aimed over the years.

Simple PI detectors are often advertised as having "automatic ground rejection" but that is not strictly true. A normal PI will ignore common ground conditions, but they still are affected by highly mineralized ground and hot rocks, and so are not suitable for most prospecting applications. A company in Australia recognized the potential however, and developed PI detectors aimed specifically at the prospecting market. These detectors do actually ground balance, or tune out the effects of highly mineralized ground and hot rocks, and so along with other models now on the market represent a subset of the PI detectors, the Ground Balancing Pulse Induction (GBPI) detector. 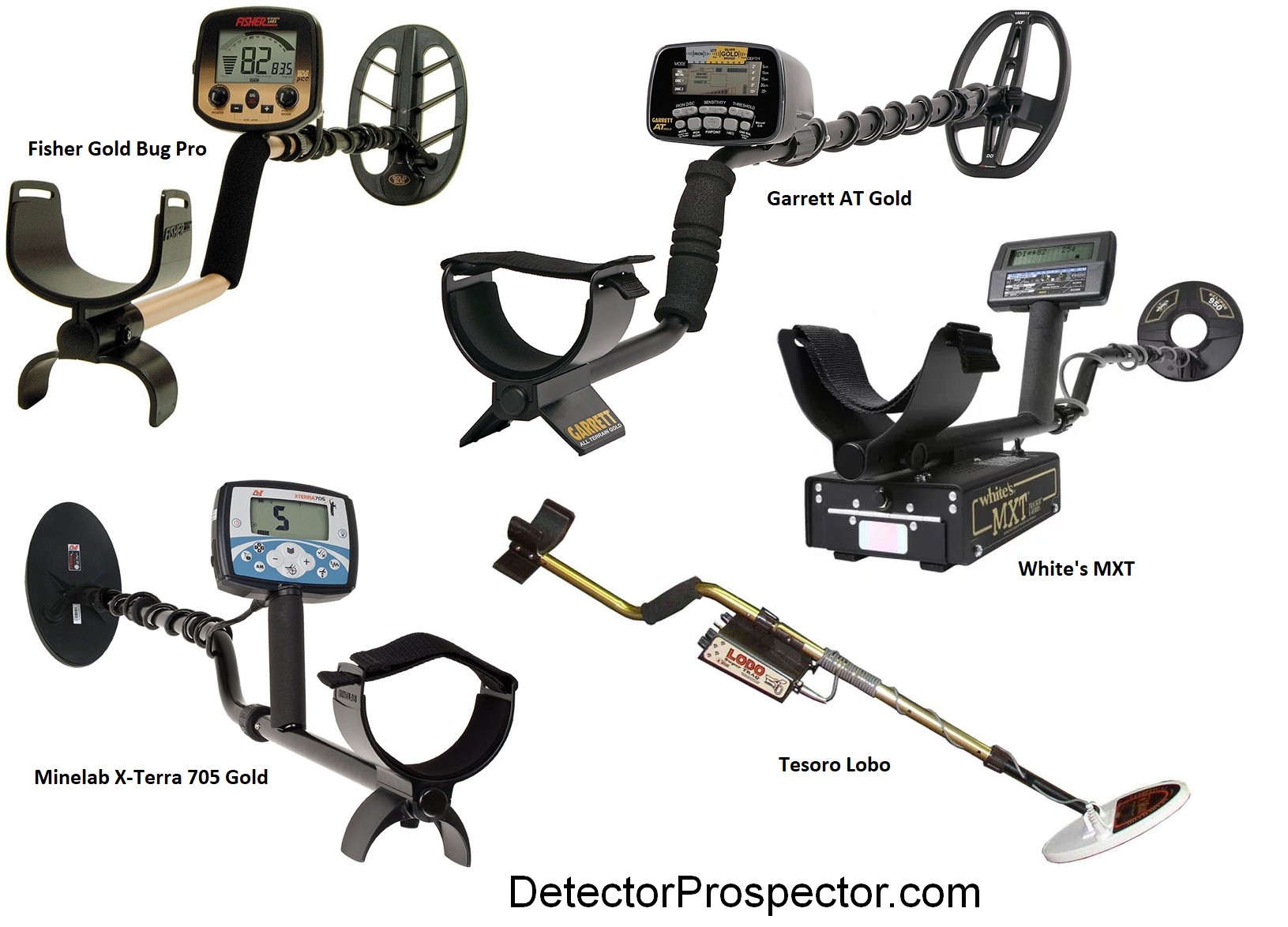 Pulse Induction (PI) detectors are sometimes advertised as using huge numbers of frequencies, which is technically true, but again is the marketing people going to work. Operating frequencies on IB detectors do not really equate with PI detectors which operate on a different principle. The closest specification in a PI detector that has some bearing on the operating characteristics is the Pulse Frequency which is the number of times the transmitter pulse is repeated every second. It is usually quoted at Pulses Per Second (PPS). The pulse frequency affects the response time (slower PPS call for slower sweep speed), power consumption (higher PPS uses more power) and interference rejection (adjustable PPS helps adjust out electromagnetic interference).

Pulse Induction (PI) detectors again are a special case, and the sensitivity to small items and ground minerals is more affected by the Pulse Delay than the Pulse Frequency. The Pulse Delay is the wait time between the transmit mode and receive mode. The shorter the delay, the more sensitive the detector is to small items and hot rocks. In theory a PI can be just as sensitive as an IB detector by operating at extremely short delay times, but then it would suffer the same problems as an IB detector. PI detectors designed to hunt gold often have a pulse delay of about 10uS (microseconds). Salt water however signals at 10uS so salt water PI detectors often run about 15uS. Some PI detectors can have an adjustable pulse delay that commonly runs from 10uS to 25uS.

Ground Rejection - Ground rejection or ground balance can be set at the factory (Pre-Set), manually set by the user (Manual) or automatically track ground conditions (Tracking). Fixed refers to units that lock in whatever setting the automatic system has at any moment but which cannot be manually adjusted. Manual adjustment allows a unit to be purposefully adjusted to specific conditions that cannot normally be attained through manual or fixed settings. The preferred option is to have both tracking and manual ground balance systems. A compromise between manual ground balance and ground tracking is an automatic "Grab" function. This allows the unit to be ground balanced by pressing a button. The ground balance setting is obtained instantly or with a few pumps of the coil over the ground.

Soil Adjust - This refers to a control that allows the operator to adjust the unit for basic ground conditions. Common settings are Normal, High Mineral, Low Mineral (Sensitive), Salt (for salt water beaches or salt flats) or a variable setting. The technology employed may vary. The unit will compensate for difficult conditions by basically lowering the overall sensitivity of the detector in various ways so as to not detect the item or items causing problems. The sensitivity to desired items almost always suffers as a result.

Discrimination (Disc) - Most detectors offer all metal detection, all metal with ferrous (man made iron or steel) rejection, possibly adjustable, and fully adjustable discrimination that can actually identify different non-ferrous targets one form the other. The method may be audio only, via a visual display, or both. A control that allows for only ferrous items to be rejected to a varying degree is commonly referred to as "Iron Mask".

Tone Adjust - This allows for a change of tone in the speaker output, to the sound that best suits the user's ears. Some people hear high tones better and some people better hear low tones.

Audio Boost - Boosts the audio volume on small, faint targets, making them easier to hear. It may also boost ground and hot rock signals in some areas and so is usually offered as an option.

Frequency Offset - Two detectors operating on the same frequency close together will "cross-talk" or cause some kind of false signals in both nearby detectors. A frequency offset or adjust allows for a small change in frequency so detectors are less prone to interfere with each other. The control may also alleviate interference from outside sources like power lines or cell phone towers, referred to as EMI (Electro-Magnetic Interference).

Pinpoint Mode - Common in coin detectors, rare in gold nugget detectors. The pinpoint mode is usually a variation on the all metal non-motion mode (see Search Modes above) that allows the detector to be held steady over a target as an aid to locating the exact position of the target. This may be of some benefit in some "silent search" that lack a threshold tone and which only make a sound when passing over a target. The mode is usually activated via a momentary push button or trigger switch.

Audio Output - Nearly all detectors have a built in speaker and a 1/4" headphone jack. Others vary from the norm and are so noted. Also, be aware that some detectors have a mono output and some have stereo output. This is noted when known but it is best always to have headphones that can operate in either mode. Headphone notes

Hip Mount - Some models allow the control box to be put on a belt or chest harness. A very desirable feature, as even a lighter detector can cause arm soreness, or even injury, if used for long periods of time. New detectors are so light this is now a rare feature more often seen on older models. An exception are the Minelab SD/GP detectors in that they are heavy, but through the use of an ingenious harness and bungee system they actually impose less arm strain in level ground than most detectors. Similar harness/bungee systems can be obtained for use on most detectors from aftermarket sources. Chest mounts however are still a valuable option for those thinking of using their detector in deep water.

Standard Search Coil(s) - The search coil or coils that come that come with the detector. Also referred to as loops. IB detectors have concentric or double D (DD) options. PI detectors have mono or double D (DD) options. Concentric or mono coils are usually more sensitive but more affected by ground mineralization. Double D coils handle ground mineralization better but at some loss of maximum depth in low mineral conditions. Concentric or mono coils have an inverted cone detection pattern with maximum depth dead center that fades off in all directions. DD coils have an elongated inverted canoe pattern that covers the ground more thoroughly but lacks the maximum depth dead center that concentric or mono coils offer. Large coils get more depth and cover more ground than small coils, but lack sensitivity to small targets. Small coils lack overall depth but enhance sensitivity to small targets and have better target separation by not "seeing" two targets under the coil at once. Large coils are more affected by the overall ground mineralization, small coils are more affected by hot rocks. Suffice it to say that the more coil options one has, the better. Coil compatibility

Optional Search Coils - See the note above. The more, the better.

Operating Time - Normal battery life in operation with standard battery. Note that the use of headphones will significantly extend operating times.

Weight - Weight of unit on arm with a few noted exceptions.

Additional Technology - Features offered by this detector not normally seen on other models.

Notes - Anything else of interest about the model in question.