The Garrett AT Gold was released in 2011 and is still in production. The AT Gold is a fully submersible 18 kHz VLF metal detector aimed primarily at coin, jewelry, relic detecting, and gold prospecting.

"The AT Gold operates at a high frequency optimized for gold prospecting and includes a True All Metal Mode. The ALL METAL Mode is preferred for prospecting because it provides the greatest possible depth and sensitivity. It also provides a continuous audio response to allow the operator to hear the subtle detection signals produced by faint targets. The AT Gold includes manual and automatic Ground Balance—plus an exclusive Ground Balance Window™ feature—to optimize the detector's performance in highly mineralized ground, where gold is most often found. This detector is also waterproof to a maximum depth of 10 feet (3 meters) for searching in freshwater lakes and streams. In addition to its True All Metal Mode, the AT Gold includes two Discrimination Modes, making it a versatile coin and relic hunting machine. When selecting either the DISC 1 or DISC 2 mode, the operator gains more Tone ID information from targets in addition to the ability to discriminate unwanted trash targets (e.g. nails, foil, pull tabs)." Source: Owner's Manual 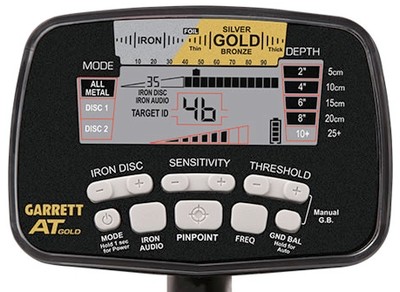