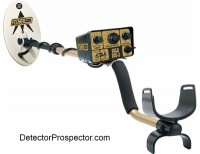 The Fisher Gold Bug 2 was released in 1995 and is still in production over 20 years later. I had the first Gold Bug 2 in Alaska and to this day it is one of my all time favorite detectors - a true classic. Amazingly, nobody has come out with a better detector for hitting tiny gold after all these years. Quite a few models have tried to challenge the Gold Bug 2 on the tiniest gold, and while many can be said to give the "Bug" a run for its money it is debatable if any have really exceeded it. There is a specialized tool called the Falcon Gold Probe that will actually hit smaller gold than a Gold Bug 2, but it would be more properly termed a pinpointer than a normal metal detector.

What makes the Gold Bug 2 special is the 71 kHz operating frequency. It was the highest operating frequency in a commonly available ground balancing metal detector for a long time. When paired with the 6" elliptical concentric search coil, the Gold Bug 2 easily detects small pieces of gold weighing less than 1/10th grain. There are 480 grains in an ounce so we are talking less than a 4800th of an ounce! I have a set of digital powder sales that weighs to 1/10th grain, and I regularly found single flakes of gold that will not register on the scale with the Gold Bug 2.

Don't think such small gold is found at any depth. I get these tiny bits by literally scrubbing the small epoxy filled coil into the soil. The coil is tough and immune to false signals from being knocked around so the goal is to get that coil right down on the gold. The 6" epoxy filled concentric coil perfectly tuned to the Gold Bug 2 is no doubt part of the magic since other detectors in this class normally run DD coils. The Gold Bug 2 is a perfect detector for "scrape and detect" operations where the surface is carefully scraped away to expose more soil for detecting. It is also ideal for checking quartz for tiny gold, like when hunting around old mine dumps. The Gold Bug 2 will hit specimens with wire or sponge gold that other detectors cannot detect.

There are only three coils for the Gold Bug 2, a 6.5" elliptical, 10" elliptical, and 14" elliptical. All three are concentric coils - there has never been a DD coil produced for the Gold Bug 2. I am a little surprised there have never been any aftermarket coils produced for the Gold Bug 2 due to its enduring popularity. I have always wanted a probe for it that would basically turn it into a Falcon Gold Probe type unit, but with more adjustment and iron discrimination. The coils are all waterproof and come with extra long seven foot cables for use when the control box is chest or hip mounted. The coils are among the best I have ever used and are immune to false signals from bumps and knocks.

The chart below illustrates a common misperception. People often ask which coil gets the most depth, and it is assumed bigger coils go deeper. That is definitely not true. Coil size has to be matched to probable target size for best depth, and the chart clearly shows how running too large a coil can cause gold nuggets to be missed entirely. The normal 10" coil is a compromise but better depths can be obtained using not only larger coils but smaller coils. Since I normally hunted small gold with my Gold Bug 2 the small coil rarely came off it.

Despite the high operating frequency the Gold Bug 2 can be made to work in the worst ground conditions. I took one to Australia recently and was surprised how well it did in tough ironstone country. It has a very good iron discrimination setting intended for rejecting man made ferrous trash. This also acts as the setting of last resort for highly iron mineralized soils and hot rocks. When in iron discriminate mode common hot rocks will be ignored or at most pop and click, but they will not sound like gold. Some sensitivity is lost in iron disc mode, but the Gold Bug 2 is so sensitive to small gold it will still hit small nuggets in disc mode that other detectors would miss.

The design is very compact and tough, and with what is getting rare these days, a removable control box. The box can be slid off the rod, and slipped on a belt with the integrated belt slots. There is plenty of extra cable, and a chest mount can easily be made with just a belt and a camera strap. This is ideal for working in deep water or heavy rain since the control box is protected and better yet creates a detector so light it can be used for very long hours with no arm strain at all.

Audio boost does just that - it boosts the audio so that faint signals are louder and more distinct. It also boosts spurious ground signals and so in some cases you may want to run the detector in Normal audio. I have found in practice I very rarely take the Gold Bug 2 out of audio boost mode. 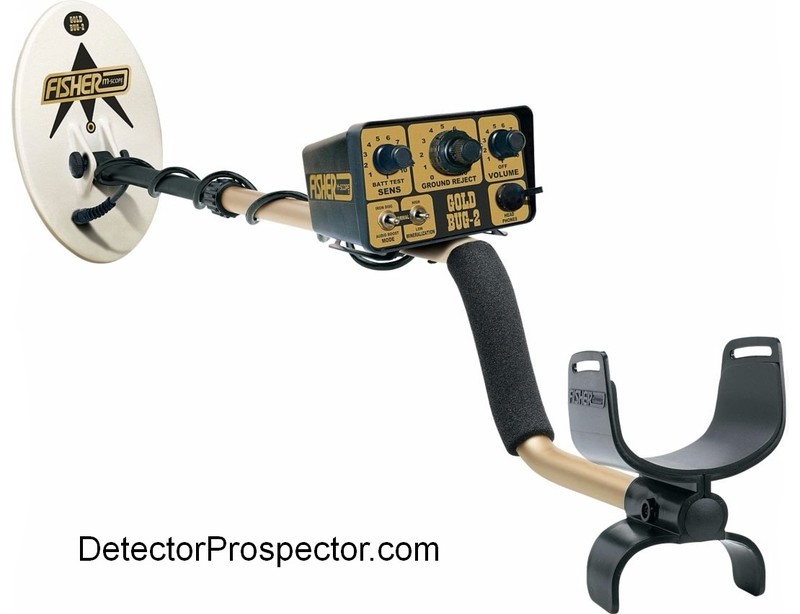 I should note here that the Gold Bug 2 employs VCO (voltage controlled oscillator) audio. Responses not only get louder but they increase in pitch ,producing very distinct "zippy" responses on non-ferrous targets. Large targets literally squeal. Some people think this means the Gold Bug 2 employs some sort of audio discrimination because they can tell a coin response from small trash responses due to this. All that is really happening is that strong signals sound different than weak signals, and so a deep coin will sound just like a shallower, smaller target.

The mineralization switch adjusts the threshold auto tune rate, with the low setting being a slow auto tune and high being a very fast auto tune. This is similar to White's Variable Self Adjusting Threshold (V/SAT) control but instead of variable you get three preset selections to choose from. A fast auto tune setting dramatically impacts performance but can be an aid in very uneven ground conditions. Experiment with it to see what I mean but for me in most places it stays set in low. You can find more information on auto tune at Steve's Guide to Threshold Autotune, SAT & V/SAT. Fisher has gone this one better by also adjusting the gain (sensitivity) via these settings at the same time as the auto tune rate is adjusted. The Low Mineral setting not only slows down the auto tune rate but it boosts the gain above and beyond where the sensitivity control is set. The high mineral setting speeds up the auto tune rate and attenuates the gain. 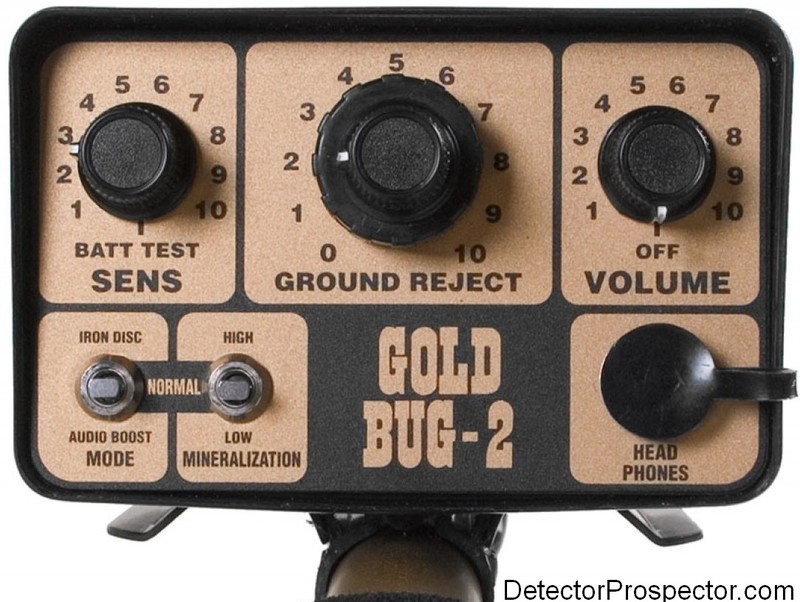 There is an undocumented trick that may or may not work on any particular Gold Bug 2 in iron disc mode. The threshold control usually has no effect when the unit is in iron disc mode. However, some units display a distinct difference in iron disc performance between the threshold being set low or being set high. This ability to "supercharge" a silent search disc mode by turning the threshold up is not unheard of in other detectors and it appears some Gold Bug 2 models have this ability. Several of us used this ability to good effect at Ganes Creek. The detector pops and clicks a lot when supercharged in this fashion but adds considerable depth on large gold nuggets. After awhile the popping and clicking is mentally tuned out as nuggets have a distinctly clearer beep.

This ability may have been an accident on some units, as more recent Gold Bug 2 models display no change in the disc mode when the threshold control is manipulated. A simple air test between low and high threshold settings while in iron disc mode will reveal if your Gold Bug 2 has this ability to be supercharged.

The iron discrimination on the Gold Bug 2 is unique compared to most detectors in that it is either on or off. There is no direct adjustment of the setting. In theory the Gold Bug 2 in iron discriminate mode rejects signals from ferrous man-made iron and steel targets plus many ferrous based hot rocks. It does this by simply ignoring and producing no signal on items deemed ferrous in nature. The setting is designed to be conservative, and so it does produce a signal on many ferrous items, but the audio response is choppy and more often a "click" than a "beep". Practice with a nugget and various ferrous targets will make the differences clear.

The more mineralized the ground, the more chance there is of gold nuggets being accidently rejected as ferrous. Borderline targets will often be rejected if swept one way and sound good if swept another way. It is therefore not a good idea to hunt directly in iron discriminate mode, as a bad call on the first sweep will cause you to miss the target and not even know it was there. It is better to hunt in all metal, then flip to iron disc to check the target. This can be an undue burden in thick trash though and sometimes it is simply more efficient to hunt directly in disc mode, but the likelihood of missing nuggets goes up dramatically.

As noted above the threshold setting may have an effect on the responses generated in the iron disc mode. The sensitivity setting will also affect the setting, and by enhancing ferrous ground mineralization response it may also lead to more gold nuggets being identified as ferrous. the ground response overwhelms the nugget response leading to a false iron reading. Reducing sensitivity may produce more accurate iron disc readings in bad ground.

If you are switching back and forth from all metal to iron disc mode constantly it can prematurely wear out the switch. I have seen several examples of the switch getting so loose as to be inoperable due to the nut on the backside of the control panel becoming loose or even falling off inside the control box. The control panel can be removed and the nut tightened if this is the case.

The Gold Bug 2 is a very specialized detector usually used solely for gold nugget detecting. Recently people have taken note of its extreme sensitivity and have pressed it into service searching for very small jewelry items that others detectors normally miss. Simple post earrings and thin gold chains are difficult if not impossible to detect and the Gold Bug 2 excels at finding these small targets. Thomas Dankowski coined the term "micro-jewelry detecting" to describe this type metal detecting.

The Gold Bug 2 does have limitations. The extreme sensitivity that makes it signal on hot rocks that other detectors would ignore. This can be very problematic in some locations, although somewhat offset by using the iron disc control in places where the hot rocks are iron based. More serious is that in highly mineralized ground the Gold Bug 2 has very poor depth on pennyweight and larger gold nuggets compared to most nugget detectors. The high frequency air tests very well but loses that depth quickly on in ground targets. Depth losses of 20-25% are not unusual with the Gold Bug 2 in highly mineralized ground when compared to detectors running in the 12-20 kHz range. The Gold Bug 2 is often best used when paired with another detector for depth on large gold while it serves as the small gold sniper.

The Gold Bug 2 also gives a strong response on wet salt sand and so when used for micro-jewelry detecting on salt water beaches wet sand must be avoided. Despite these caveats, I consider the Gold Bug 2 to be a unique and essential detecting tool that even after 20 years is worth consideration by gold prospectors wanting the hottest metal detector possible on tiny gold.