The White's PulseScan TDI was released in 2008 and is still in production as the TDI SL. Prior versions have been discontinued. I was one of the original users of the TDI and still dabble with them to this day. See my story White's TDI at Moore Creek, Alaska for pictures of lots of TDI gold nugget finds. I also have extensive notes on using the TDI for coin detecting at Steve's Guide to White's TDI Coin Settings. The TDI is a unique detector and is seeing use in many applications unforeseen when it first came out.

The TDI has been available in several versions but all are basically the same detector as far as how they work. October 2019 Note: White's has a model called the TDI Hi-Q, which is a TDI SL with straight rod, new coil, and tan or camo paint job. See the details here.

I am a big fan of competition as I always want more and better detectors from the manufacturers personally, and I think competition is the best way to get better detectors. After Garrett got into the ground balancing pulse induction (GBPI) game with the Infinium people including myself were really after White's to make an entry into the field. I went so far as to visit White's Electronics personally to lobby for such a detector with suggestions on how to get there. In particular, I advised that rather than developing something from scratch, it might make more sense to license the existing Goldscan technology from Eric Foster, widely known as "the father of pulse technology" for his early work in the field.

Eventually White's did decide to pursue the matter, and I was therefore aware early on that White's was working on a new detector, In 2007 I was sent a prototype unit to evaluate while I was on vacation in Hawaii. I was very impressed not only with the power of the detector but more importantly for me in Hawaii I was very impressed with how stable the detector was in salt water. It was also virtually immune to electromagnetic interference (EMI) issues that had dogged my use of other detectors in Hawaii. 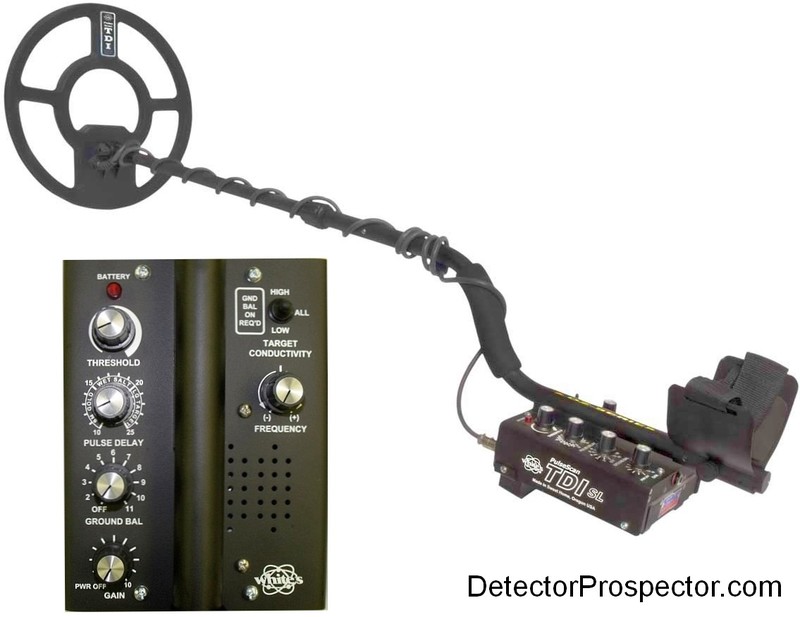 My use of previous GBPI detectors, the Minelab models and the Garrett Infinium, made me familiar with how they respond to targets with various tones. Each target generates a dual tone that varies depending on whether the target is above or below the ground balance point that has been set. You will hear either a high tone followed immediately by a low tone (hi-lo), or a low tone followed immediately by a high tone (lo-hi). This dual tone system is effective for most uses but if you get into a target rich location it in effect doubles the number of audio signals coming from the detector.

I also had an opportunity in Alaska to visit with Brent Weaver, the main engineer at Garrett responsible for the development of the Infinium. While testing a prototype Infinium I asked him about the dual tones (Garrett now refers to them as "echos") and whether they could be suppressed. He told me the dual tones were integral in how the Infinium worked and that it was not practical to produce a single tone result on the circuit they were working with.

White's did end up working with Eric Foster on the development of the TDI. His method is one I like because instead of the dual tone responses generated by the Minelab and Garrett models (hi-lo or lo-hi) the TDI generates one of two tones, either a low tone, or a high tone. The tone depends on whether the target is above or below the current ground balance setting, and therefore there is only a tone difference when the ground balance system is engaged. The ground balance off, straight PI mode has monotone responses. Also, because the ground balance can be set manually on the TDI, this tone "breakpoint" can be shifted by the operator. This allows targets to be separated broadly into two distinct groups. On one hand there are high conductor type targets, like most coins and large steel items, that on the TDI produce a low tone response. The other group is comprised of low conductor type targets, and includes most gold items, US nickels, aluminum, and small ferrous trash. These all produce a high tone response on the TDI. There are far more high tone targets than low tone targets in most locations.

I really liked the prototype TDI that I used in Hawaii, in particular the fact that it generated half the audio responses compared to a Garrett or a Minelab. Once again I wondered if one tone or the other could be suppressed. I sent an email to Eric Foster, and was surprised when he told me that not only could it be done, but it would be a very simple thing to implement with a basic toggle switch arrangement. This came about very late in the TDI development, and I lobbied hard for just such a feature to be added. A last second vote was taken by those involved, and probably the last major change on the TDI before it went into production was the Target Conductivity switch. There was no such switch on the tan prototype models. 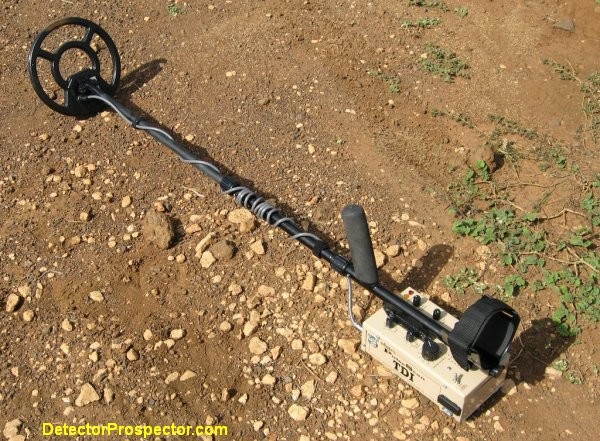 Now, I do not want to give the impression I was some kind of major player in the development of the TDI. I was just one of many voices pushing at White's for years to develop a ground balancing pulse induction (GBPI) detector. I am pretty sure though my last second inquiry and little push was what made the tipping point to getting the Target Conductivity switch included, and I think to this day it is one of the most useful and intriguing features on the TDI. It allows for a vast reduction in the number of audio responses in certain situations and in conjunction with the manual ground balance and pulse delay offers a degree of discrimination on the TDI not seen on any other pulse induction detector made today.

This makes the TDI a pulse induction machine that can be used effectively for coin detecting, if the operator knows what they are doing and employs some smarts in site selection. I wrote an article entitled Steve's Guide to White's TDI Coin Settings on this very subject. I will not repeat the information here in the interest of keeping this page from getting too long so check out the link. Suffice it to say the TDI has the ability to play tricks and discern targets far beyond what most PI detectors can achieve. 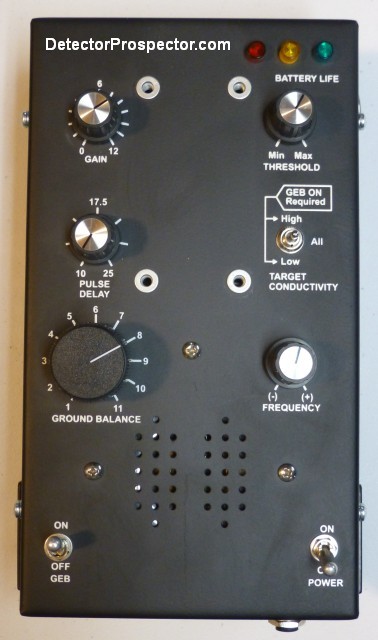 The way it works is this. In low mineral ground a PI gets maximum depth without using any ground balancing. However, as mineralization increases, depth is affected. The more mineralization, the more depth is lost. Also, ground effects increase. In low mineral ground, the coil may be raised off the ground with little response. In highly mineralized ground, raising the coil even slightly off the ground produces a false signal. Nearly all PI detectors have an audio retune circuit that slowly retunes the audio response to keep it at the set threshold level. Otherwise circuit drift and minor ground variances would require constant retuning. In high mineral ground, the ground produces a response, but the detector compensates as long as the coil is kept at an exact height over or on the ground. If the coil is raised quickly, the audio overshoots when the ground signal is removed and a false signal occurs. This can be a real problem in even ground or in the water where it is difficult to maintain a steady distance above the ground or sea bottom.

Hot rocks or wildly varying ground mineralization present an even greater issue. Again, the detector does well as long as the conditions are constant, but when a hot rock or mineralized ground condition like a clay seam enter the picture, a false signal is heard. In areas with lots of hot rocks PI detectors that cannot ground balance are almost useless due to the overwhelming number of false signals.

So imagine a PI with no ground balance in low mineral soil. All is well, maximum depth is achieved. Pretend we have the ability via a magic dial to turn up the ground minerals and/or hot rocks in the ground. A point is reached where performance and efficiency is greatly impacted. It becomes impossible to discern good targets from ground signals and false hot rock signals. At such a point, engaging the ground balance circuit gains back the lost performance and efficiency. It does this by eliminating the ground signal and hot rock signals.

This leads to situations occurring where people use a GBPI detector in low mineral ground and decide they are no better than a VLF. That actually often is true, in that a good VLF in all metal mode will do about as well as a Ground Balancing PI in low mineral ground, if both have similar coil sizes. A GBPI does not come into its own until the ground conditions or hot rocks are such that a VLF operator wants to toss the detector in a gully in frustration.

This has been a very long lead explanation to the TDI secret weapon. In low mineral ground, turn the ground balance off! The detector will become extremely stable with a very smooth threshold and become more resistant to electrical interference. Gain may be boosted and a great deal of extra depth achieved in situations that allow for this type of operation, and they are actually very common. This would be the preferred beach mode on most beaches, the exception being beaches with a lot of black sands. The White's TDI in pure PI mode is one of the most powerful straight PI detectors available. The tone differences between targets disappear, and sometimes the ability to differentiate targets is more important than the depth gained by shutting the ground balance system off. But do not overlook this ability to run without ground balance in situations that warrant doing just that as it can really pay dividends to the knowledgeable operator. 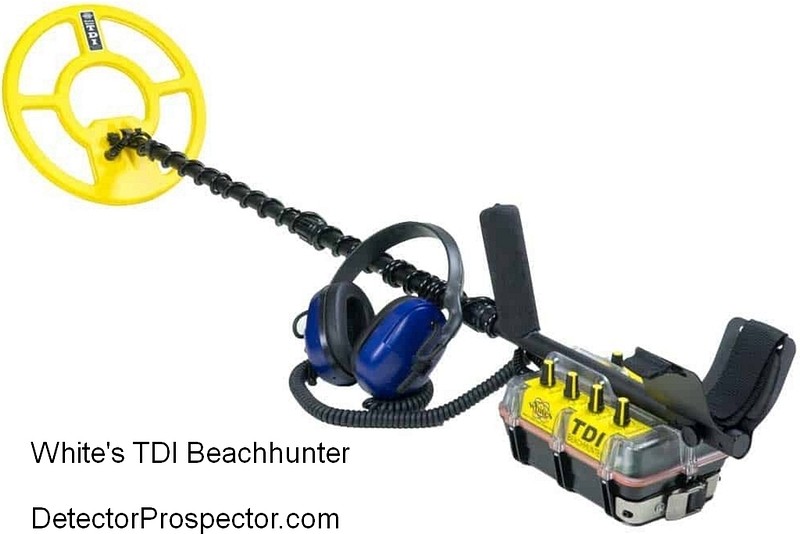 Some Commentary On TDI Tuning & Discrimination 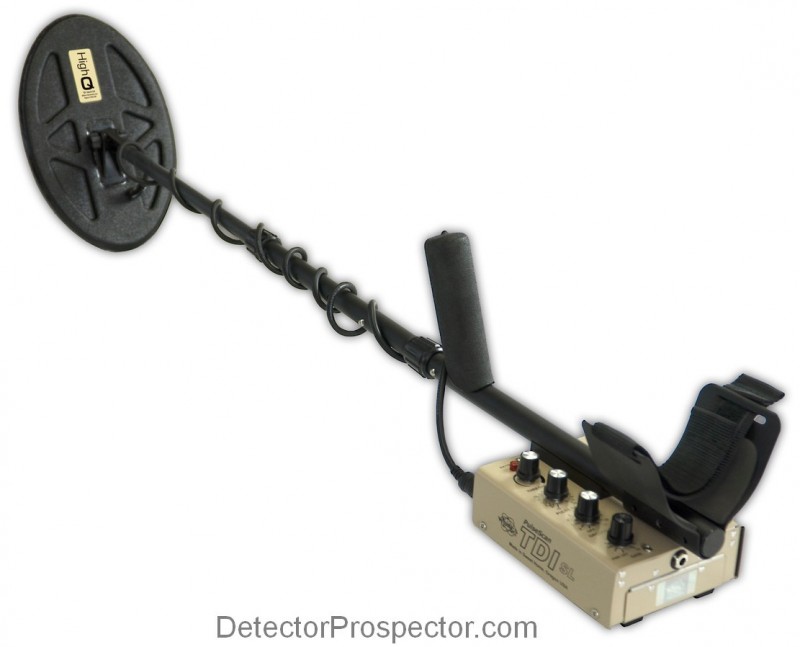