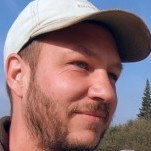 Detecting In Small Creeks / VLF Vs SDC Vs GPZ